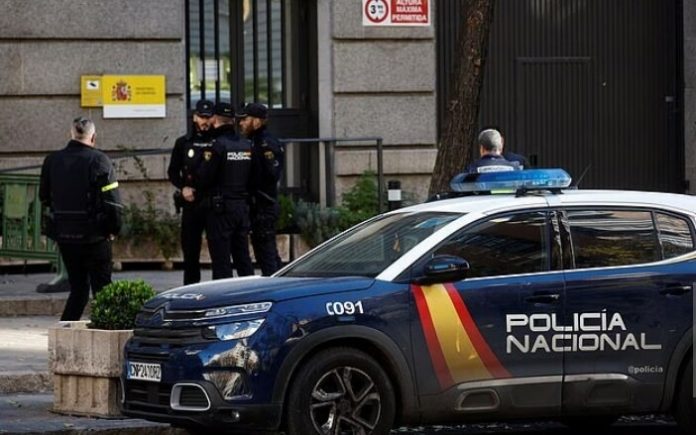 The packages, soaked in a liquid with a distinctive colour and smell, were sent to Kyiv’s embassies in Hungary, the Netherlands, Poland, Croatia, Italy and Austria, spokesperson Oleg Nikolenko wrote on Facebook.

The disturbing discovery comes after six letter bombs were sent to high-profile targets across Spain this week, including the Ukrainian embassy in Madrid, the Spanish Prime Minister Pedro Sanchez, a Spanish weapons manufacturer supplying rockets to Kyiv, the defence ministry and an air force base.

An embassy source in Rome said human faeces were left in front of the door. Nikolenko also said that the embassy in Kazakhstan had received a bomb threat, which was subsequently not confirmed.

Ukraine’s Foreign Minister Dmytro Kuleba said the bloodied packages discovered in Kyiv’s embassies across Europe was a ‘well-planned campaign of terror and intimidation’. He appeared to blame Russia for sending the packages.

“We have reasons to consider what’s going on a well-planned campaign of terror and intimidation of embassies and consulates of Ukraine,’ Kuleba said.

“Not being able to stop Ukraine on the diplomatic front, they try to intimidate us. However, I can immediately say that these attempts are futile. We will continue to effectively work for Ukraine’s victory.

“We are well aware of the terrorist methods of the aggressor country,’ he said. “Russia’s methods and attacks require us to be ready for any kind of incident, provocation and attack.

“The U.S. embassy in Madrid on Thursday discovered a suspicious envelope that was similar to the five other letter bombs that had been spent to the high-profile locations in the city.

The envelope was destroyed by police officers in a controlled explosion at the US embassy, the Spanish Interior Ministry said. No injuries have been reported.

Russia’s embassy in Spain dismissed the apparent accusation and said yesterday: ‘Any threat or terrorist act, especially those that target a diplomatic mission, is to be totally condemned.

Earlier on Thursday, it emerged that Prime Minister Sanchez received a booby-trapped letter which contained ‘pyrotechnic material’ on November 24.

The envelope, addressed to Sanchez, was destroyed by security staff who carried out a ‘controlled explosion’, the interior ministry said on Thursday.

And since Sanchez was sent the letter bomb, ‘similar’ devices have been sent to six locations across Spain – including a weapons manufacturer which supplies rocket launchers to Kyiv as well Ukraine’s embassy in Madrid.

A letter bomb ignited in the hands of a security guard at the Ukrainian embassy, injuring the officer.

The sending of small explosive devices in postal parcels is not uncommon in many countries. They were a common occurrence for many years in Spain, especially during the most active years of the now-defunct armed Basque group ETA.

Pérez said security was increased at public buildings following the discovery of the package sent to Spain’s prime minister.

The move now has been extended to embassies, which already had extra security measures in place after the start of the Russian invasion of Ukraine in February.