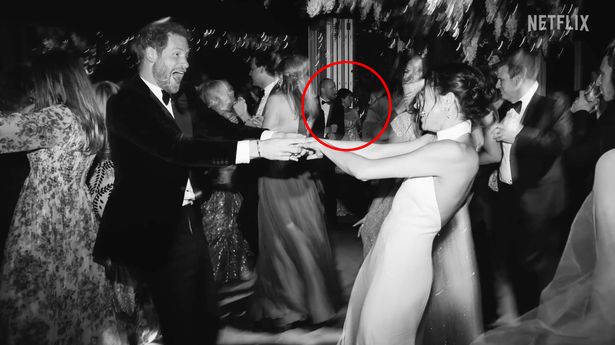 After months of waiting, royal’s fans have finally had their first glimpse of Meghan Markle and Prince Harry’s Netflix documentary series. The dramatic minute-long clip includes emotional interviews with the couple and unseen photos from their personal photo albums.

There are also photos from royal engagements, including a snap of the Princess of Wales, however, eagle-eyed royal fans have also spotted another familiar face in the background of one of the stunning professional photos.

The couple shared a beautiful black and white photo from their 2018 royal wedding, showing them dancing surrounded by their nearest and dearest. And who is showing off some pretty impressive moves – none other than the not-quite King of the Jungle, Mike Tindall.

The former rugby player and wife Zara, the Queen’s granddaughter, can just about be seen dancing away dressed in their party frocks.

The Duke and Duchess of Sussex held their wedding reception at Frogmore Hall in Windsor. The new snap is the first time we’ve seen inside the star-studded evening, with the documentary expected to give new insight into the lives of the royal couple.

Mike, 44, had offered some words of encouragement to Meghan during a pre-wedding appearance on Good Morning Britain, stating: “The best thing about the royal family is that they are so lovely and they’ll spot the people who are looking a little bit nervous and go straight over and take away all of that tension straight out of the room.’

“It’s a special day for them both, and as long as they get a quiet moment during the day and actually have enjoyed the day that’s what I wish for them, and hopefully they’ll live happily ever after.”