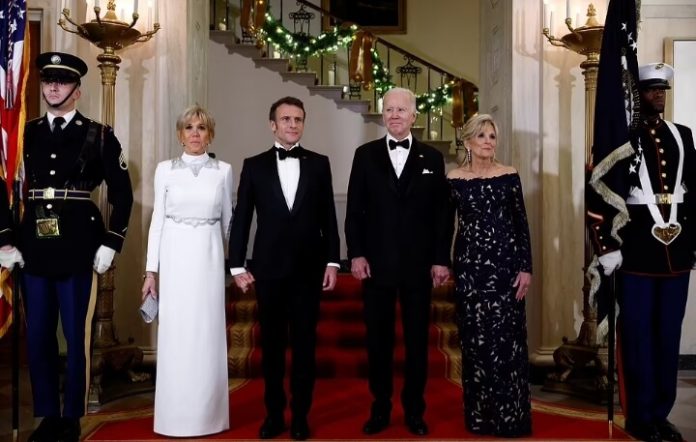 The super event is heralded with super guests along with a gaggle of guests with potential for conflict.

As the Bidens and Macrons exchanged greetings, their guests arrived for the black-tie a ffair, which took place in a glass tent on the South Lawn of the White House.

It was a lovely sight seeing the two presidents clinked glasses and talked about the long friendship between the two nations.

“France was our first ally. The first country to fly an American flag after our revolution,”Biden said.

“I actually grew up in a place called New Castle, Delaware County, near Brandywine Battlefield. Where a young man named Marquis de Lafayette fought for the American cause and became close friends with a fellow named George Washington.

“We stand together against oppression and injustice, we stick up for one another in our democratic values to which Washington and Lafayette dedicated their lives,’ he said.

”And we still strive to build a world that’s worthy of our highest hopes and of our future, knowing that we can always, always count on one another as allies and friends.”

Biden then asked the guests to raise their glasses, ‘which neither one of us have,’ as the waiter brought two champagne flutes onstage – and the presidents toasted.

It is the turn of Macron to say few words when the French president spoke of how people in the United States and France are ‘living in democracy and freedom.’

”And in a lot of places today, these principles are at risk or challenged, even in our societies, in our democracies, a lot of people just want to jeopardize or revert from this principle, challenge elections and so on, we stand together shoulder to shoulder,” Macron said.

House Republican Leader Kevin McCarthy brushed off a question about whether it will be awkward attending a dinner with the president’s son, who GOP lawmakers have vowed to investigate when they take control of the House in January. ”I’m at dinner with my mom so I’m going to have a great time,” he said.