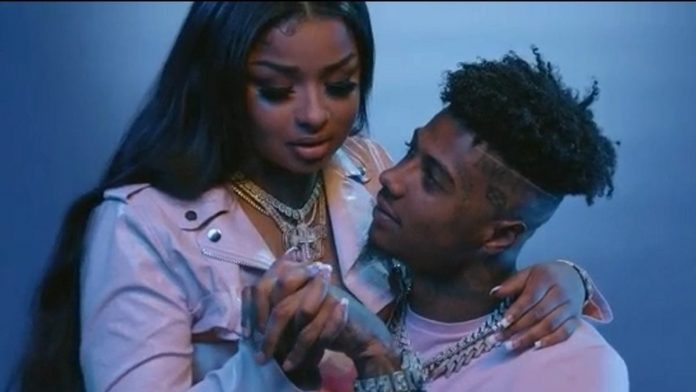 Chrisean Rock has announced she is pregnant for rapper Blueface but his response to her news shows he’s not enthusiastic about it.

Musical artiste Chrisean took to her Instagram Stories to share a video of herself going to the hospital for a pregnancy test. The result was positive.

On Friday (January 20), which was Blueface’s 26th birthday, Rock subtly revealed her pregnancy with a tweet that simply read: ‘Happy birthday Baby Daddy [tongue out emoji].’

Moments later, the ‘Thotiana’ rapper told fans that, moving forward, the two will only be business associates, as he doesn’t believe the child to be his.

In another video, she hinted at the possibility of having a multiple pregnancy because multiple heartbeats were heard during the ultrasound.

Chrisean has been in an abusive relationship with Blueface – with both abusing and fighting each other – so her pregnancy announcement was greeted with concern as fans worried the abuse would affect their child.

Following the announcement, her on-and-off boyfriend Blueface took to Twitter to say he’s not accepting the baby until a DNA test proves he’s the father.

He added that he hopes the baby isn’t his. He then accused her of having ‘encounters with 10 different men in the last year.’

‘She’s pregnant with somebody else’s child, not mine,’ Blueface wrote.

He added that he and Chrisean Rock were ‘officially done’ before she made the pregnancy announcement.

Chrisean hit back, telling Blueface that she hasn’t slept with any other man.

She then told him that if he insists on a DNA before accepting her child, she will tell the child that their father is dead and she will raise the child alone.

After their initial Twitter exchange on Friday, Chrisean Rock and Blueface continued to throw jabs at each other on the platform for over an hour.

As the conversation continued, Rock eventually revealed to her followers that the couple had already called it quits before she announced that she was expecting.