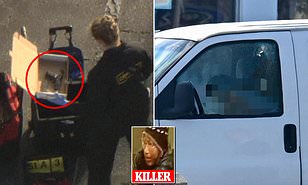 The gunman who slaughtered 10 people during Chinese Lunar New Year celebrations in Monterey, California was found dead of a self-inflicted gunshot wound in the van he used to flee after his attempt at a second shooting was thwarted by ‘hero’ patrons.

Police surrounded the van with tactical vehicles and bomb squad trucks for hours before going in.

A person’s body appeared to be slumped over the wheel, but authorities did not immediately identify the person in the van.

Los Angeles County Sheriff Robert Luna previously released photos of an Asian man who was believed to be the suspect, but he did not release the man’s name.

The manhunt came after a gunman killed 10 people at a ballroom dance studio late Saturday amid Lunar New Years celebrations in the predominantly Asian American community of Monterey Park.

He likely tried and failed to target a second dance hall, authorities said.

The shooting sent a wave of fear through Asian American communities in the Los Angeles area and cast a shadow over Lunar New Year festivities around the country. Other cities sent extra officers to watch over the celebrations.

The exact ages of the victims were not released, but Luna said they all appeared to be over 50. Seven of the wounded remained in the hospital, he added.

Then 20 to 30 minutes later, a man with a gun entered the Lai Lai Ballroom in nearby Alhambra. But patrons wrestled the weapon away from him and he fled.

Authorities believe the two events are connected. They offered no details about a possible motive.

‘Remember, the suspect went to the Alhambra location after he conducted the shooting and he was disarmed by two community members who I consider to be heroes,’ Luna said on Sunday.

‘They saved lives,’ he added.

‘This could’ve been much worse. The weapon that we recovered at that second scene I am describing as a magazine-fed semiautomatic assault pistol. Not an assault rifle, but an assault pistol that had an extended large capacity magazine attached to it.’

Another gun, a handgun, was later found in the van where Tran was found dead of a self-inflicted gunshot wound. Luna said that the van had different plates.

Authorities had been on the lookout for the vehicle after witnesses reported seeing the suspect fleeing Alhambra. He was also spotted seeking medical treatment at a hospital shortly before the standoff, law enforcement sources tell CNN.

The man came into the emergency room seeking treatment for injuries that were consistent with being in a fight. He waited for a short time and then left without receiving treatment, the sources said.

The hospital notified authorities when they saw that the man fit the description of the suspect’s photos posted on the sheriff’s department’s Twitter feed.

A short time later, police in Torrance pulled the white van over which led to the three-hour standoff.

By midday, police in tactical vehicles and bomb-squad trucks surrounded a white van in a parking lot 22 miles from Alhambra in Torrance, another majority Asian community.

It ended as police approached the vehicle and heard a gunshot. Tran was found dead of a self-inflicted gunshot wound.