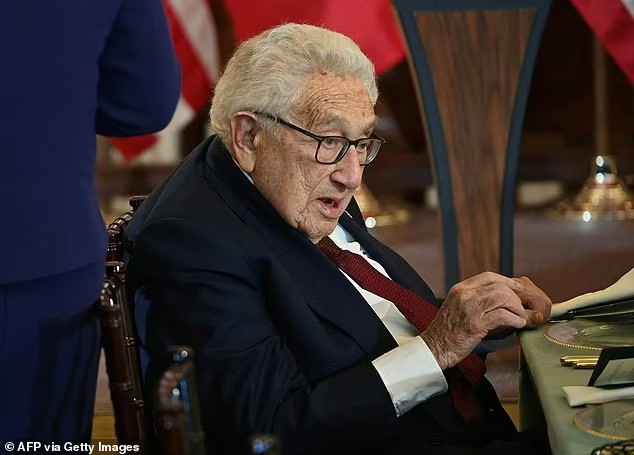 US elder statesman Henry Kissinger said Tuesday that Russia’s invasion shows there is no longer a point to keeping Ukraine out of NATO, the long-held aspiration of Kyiv that he had opposed.

99-year-old Kissinger, a former secretary of state and national security adviser, said he believes Ukraine joining NATO could be an ‘appropriate outcome’ of Russia’s invasion, while reiterating his call for a negotiated solution to the conflict.

‘The idea of a neutral Ukraine under these conditions is no longer meaningful,’ Kissinger told the World Economic Forum’s annual meeting in Davos, Switzerland on Tuesday.

His comments come a day before Russian President Vladimir Putin is set to deliver an ‘important statement’ concerning the war in Ukraine on Wednesday.

He also warned against direct conflict between the west and Russia and stressed the importance of allowing Russia to rejoin the international system.

Kissinger said that limited and concrete steps from both the US and China are necessary to improve ties between the world’s two largest economies.

Longer term, he said Washington and Beijing should weigh the risks of conflict between two nuclear-armed states that are also developing artificial-intelligence capabilities.

‘Each side needs to consider for itself how the threat to human survival of the destructiveness of weapons, coupled with making them almost conscious in their application, can be dealt with,’ Kissinger said.

On Taiwan, Kissinger said that both sides should avoid actions that suggest an ‘imminent showdown’ and cool threatening language to create conditions for dialog.