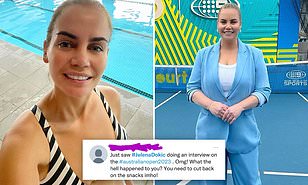 Former Australian tennis star Jelena Dokic has hit back at online trolls that have fat shamed her during the ongoing Australian Open.

In an Instagram post on Monday morning, January 23, Dokic, who is working as a sports commentator for CNN affiliate 9 at the event, said the ‘body shaming’ and ‘fat shaming’ she had received in the past 24 hours was ‘disgusting.’

‘The most common comment being ‘what happened to her, she is so big’?’ Dokic wrote.

‘I will tell you what happened, I am finding a way and surviving and fighting. And it really doesn’t matter what I am doing and what happened because size shouldn’t matter.’

Dokic retired in 2014, after several career highs including reaching the 1999 Wimbledon quarterfinals, aged just 16. A year later, she made the last four at Wimbledon.

Dokic has spoken in the past about her struggles with her mental health.

Last June, in a video posted to Instagram, she revealed she had come close to taking her own life and said getting professional help had saved her.