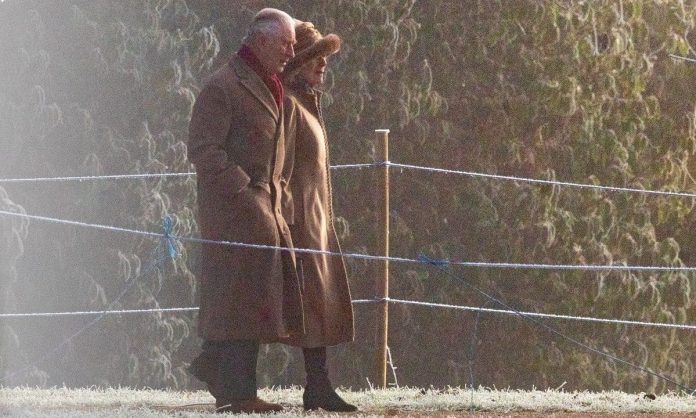 King Charles and Queen Consort Camilla walked to church on the Sandringham estate on Sunday morning, as they headed to the morning service at St Mary Magdalene church.

The royal couple were wrapped up warm against the cold, with the King wearing a long brown coat and red scarf, while his wife teamed her matching brown coat with a fur-lined hat and black boots.

Members of the public greeted the couple after the service, despite the fog, chilly temperatures and frost-covered ground.

The couple appeared to be in good spirits despite the weather, with Camilla cheerily waving to some schoolchildren who’d gathered to say hello.

The outing marked the first time the couple has been seen at church since the details of the King’s coronation were released.

The couple braved the fog and frost to walk to church. Photos: Geoff Robinson

Held on 6 May, the event will be historic in many ways, including being held on a Saturday for the first time in more than 100 years.

The coronation will begin with the King’s Procession, where Charles and Queen Consort Camilla will arrive at Westminster Abbey after traveling from Buckingham Palace.

Following the service, the newly crowned pair will return to Buckingham Palace in the Coronation Procession, where they will be joined by other members of the royal family.

The day’s events will finish with senior royals appearing on the balcony with Charles and Camilla. It has not yet been confirmed which family members will be joining them.

Sunday 7 May will see a coronation concert outside Windsor Castle, similar to the Party at the Palace during the late Queen’s Platinum Jubilee, which promises to feature “global music icons and contemporary stars”.

The concert is also due to feature an orchestra and dancers as well as The Coronation Choir, which will be made up of members of community choirs from across the nation, including refugees, deaf people, NHS staff and the LGBTQ+ community.