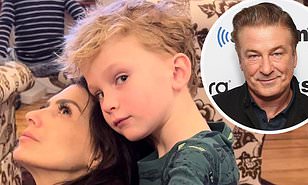 Alec Baldwin, 64, has come under fire for his first Instagram post since news that he will be charged with two counts of involuntary manslaughter.

The actor was charged with two counts of involuntary manslaughter last week.

Under a sweet photo of his son holding his mother’s shoulders as they sat on their living room floor Sunday, the Golden Globe winner sent trolls into a frenzy as he suggested his little boy was pulling ‘the old let me give you a back rub ploy’ on mom Hilaria Baldwin.

The public post came just hours after Boston-born Hilaria was ridiculed for slipping into an ‘offensive’ Spanish accent while asking photographers to leave her kids alone in wake of Alec’s charge.

‘Imagine being indicted for involuntary manslaughter and the first post you make after the announcement includes a picture of your attention-seeking wife, posed with your young son, and captioned with a sexually suggestive innuendo,’ one critic asked in the comment section.

Another wrote: ‘Does anyone else think this is creepy af with the caption? Pic is sweet. Caption makes it weird.’

A third commenter wrote: ‘Dude you need consult your team before you post man this does not help your case.’

One of Baldwin’s fans explained to the 30 Rock star that the ‘back rub ploy is a joke between grownups not mother/ son.’

Others pleaded with the father-of-eight to stop being ‘problematic’ and to stop posting at all.

Nevertheless, some found the caption innocuous, and implied her son was just buttering up his mom for ‘ice cream after 9pm.’

Last week, sources claimed Alec is ‘trying to stay strong’ for his kids after being charged with involuntary manslaughter over the death of Halyna Hutchins.

The cinematographer was killed when a prop gun went off during rehearsals on the set of the upcoming Western movie in October 2021 and now the654-year-old actor – who is married to Hilaria Baldwin and has Carmen Gabriela, nine, Rafael Thomas, seven, Leonardo Ángel Charles, six, Romeo Alejandro David, four, Eduardo Pao Lucas, two, and daughters Ilaria Catalina Irena, three months with her – but is said to be ‘focused’ on his children and ‘leaning’ on his wife as they come to terms with the charges.

Alec has repeatedly denied any wrongdoing and said Dave said it was a ‘cold’ gun – meaning it was unloaded and safe – when he handed him the weapon.

Hannah was not present when the incident occurred, but the actor previously suggested she bare some responsibility as it was her job to prepare and check the props.

The ’30 Rock’ star previously insisted he did not pull the trigger when Halyna was shot, but the FBI tested the weapon and late issued a report which concluded it would not have fired if someone hadn’t pulled the trigger.

Halyna’s death was previously ruled an accident but her family filed a wrongful death lawsuit against Alec and others involved in the production.

The lawsuit was settled last October, and it was agreed filming would resume on ‘Rust’, with the cinematographer’s widower, Matthew Hutchins, on board as an executive producer.