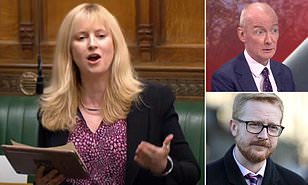 Shadow Treasury minister Pat McFadden said it was ‘tragic’ that one of the party’s own MPs Rosie Duffield felt she could not express her views without being shouted down.

Ms Duffield, a campaigner for women’s rights and critic of looser gender identity laws, spoke out on Friday after she was jeered by male colleagues in the House.

The Canterbury MP said one veteran ‘yelled his disapproval at me’ and Mr Russell-Moyle ‘started to heckle every woman who spoke of their similar concerns’.

Russell-Moyle later conceded that he ‘failed to control his passion’ during the debate, but has been criticised for stopping short of a full apology.

Speaking to Times Radio this morning, Mr McFadden said: ‘I thought it was bad, tragic that a debate about such sensitive issues, with deeply held, sincerely held views, that Rosie didn’t feel that she could express those views without that response in Parliament.

‘People are entitled to agree or disagree with what she said that’s fair enough. And entitled to feel strongly about it.

‘But on this issue, which is maybe not a new issue for society, but it’s quite a new issue for politics, and for legislation, we have got to work through these things with care and with sensitivity. And that’s not what she experienced in parliament the other day.’

‘He certainly shouldn’t have done it. I don’t know what was in his mind. He probably should apologise,’ he added.

Labour MP Duffield said she was ‘defending the need to protect vulnerable women in single-sex spaces’ during a heated debate about Scotland’s Gender Reform Bill, which would have given 16-year-olds the right to change sex but is being blocked by ministers for fear of its impact across the UK.

She also wrote: ‘When I come home at night I feel low-level trauma at my political isolation.’