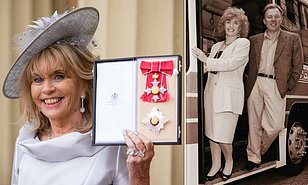 The millionaire co-founder was charged with human trafficking offences.

Dame Ann ‘strongly disputes’ the allegations, a spokesperson told the paper. It is understood that they concern her charitable work.

BBC Scotland has been told that the 80-year-old co-founder of Stagecoach was charged after voluntarily attending Falkirk police station with her husband for an interview on Thursday.

Her husband David McCleary and two other members of their family have also been charged.

All four strongly deny the charges against them.

Dame Ann co-founded the transport company Stagecoach with her brother Sir Brian Souter in 1980, and served as an executive director until 2000.

She has also been involved in several charity projects, founding the Freedom From Fistula Foundation in 2008.

The charity is dedicated to helping women and girls injured by prolonged, obstructed childbirth in Sierra Leone and Madagascar.

A statement issued on behalf of Dame Ann said that she could not comment on the details of an ongoing investigation.

It added: ‘Dame Ann strongly disputes the malicious allegations that have been made against her, her foundation and members of her family, and will vigorously defend herself and the work of her foundation to protect her legacy and continue her work helping thousands of people in the UK and abroad every year.

A spokesperson for Police Scotland said: ‘On January 19, 2023, four individuals were charged in connection with an investigation into alleged human trafficking and immigration offences.

‘A report will be sent to the procurator fiscal.’

Dame Ann was made a Dame Commander of the Order of the British Empire in the 2019 New Year Honours list in recognition of her business and charitable work.

She and her brother, who grew up on a council estate in Perth, launched Stagecoach in 1980 by running second-hand buses between Scotland and London.

The deregulation of bus services in 1985 paved the way for the firm’s rapid expansion, becoming one of Britain’s biggest bus, coach and rail operators and gaining major interests in the United States.

The pair began reducing their shareholdings in the company in 2021, as part of a long-term plan to ‘rebalance’ their investment portfolios.

Dame Ann is now a philanthropist with charity interests around the world.

She set up the Gloag Foundation to support projects that ‘prevent or relieve poverty and encourage the advancement of education, health and religion in the UK and overseas’.

The foundation supports charities including Freedom from Fistula, a charity founded by Dame Ann, which supports women and children in Sierra Leone, Malawi and Madagascar.