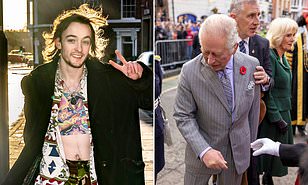 NEW YORK – Patrick Thelwell, 23, appeared at York Magistrates’ Court on Friday to deny a charge of using threatening or abusive words or behaviour.

The incident is said to have taken place when the King and Queen Consort were visiting the city on 9 November.

Patrick Thelwell appeared at York Magistrates’ Court charged with a public order offence relating to the incident on November 9.

Wearing a top that exposed his midriff, Thelwell, 23, pleaded not guilty to using threatening or abusive words or behaviour.

Thelwell’s solicitor, Nicola Hall, said the issues at trial would include whether his actions ‘were part of legitimate protest’ and whether they ‘looked likely to cause fear of unlawful violence.

‘He would take the view his actions were necessary and part of a protest against the establishment,’ Ms. Hall told the court.

Thelwall is an Extinction Rebellion protester who previously stood as a candidate for the Green Party in the 2019 local elections in York.

Senior District Judge Paul Goldspring released Thelwell on unconditional bail until his trial at the same court on April 14.

The incident took place on the second day of the monarch’s official tour of Yorkshire as he was greeted by people at Micklegate bar in New York.

Four eggs were thrown towards the King and Queen Consort, all of which missed.

Charles and Camilla were ushered away by security shortly after the incident.

Last week Harry May, 21, was fined £100 and ordered to pay £85 for an egg attack on the King when he visited Luton in December.

May told police the egging was motivated by his belief that the King’s visit to ‘deprived and poor’ Luton, was ‘in bad taste’, prosecutors said.