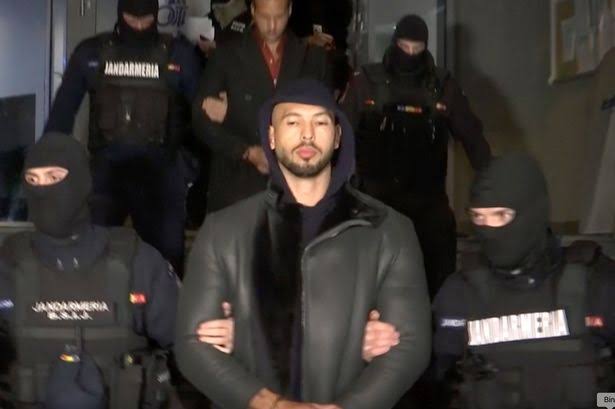 Controversial Influencer Andrew Tate and his brother Tristan will remain in police custody until February 27 after a Romanian court on Friday extended their detention, Tate’s lawyers told CNN affiliate Antena 3.

The brothers are being investigated on allegations of human trafficking and rape.

Romania’s Directorate for Investigating Organized Crime and Terrorism (DIICOT) initially said the four suspects had been detained for 24 hours.

A Bucharest court accepted an application by DIICOT to hold Tate and his brother Tristan in custody for a further 30 days, their lawyer Eugen Vidineac said on December 30.

This has been extended again to February 27,  an official said Friday.

DIICOT alleged that the four suspects formed an organized criminal group that stretched from Romania to Britain and the United States, for the purpose of committing the crime of human trafficking.

The agency said last Thursday that seven more properties had been searched as part of the investigation, bringing the total number of properties probed to 12.

The authorities allege that two of the suspects misled the victims ‘into believing that they intended to enter into a marriage/cohabitation relationship’ while transporting victims to Romania and later sexually exploiting them with physical violence and coercion.

Authorities also said one of the suspects raped a victim on two separate occasions in March 2022. At least six victims were allegedly ‘sexually exploited by the organized criminal group,’ the DIICOT statement said.

On Monday, Romanian authorities said they had seized nearly $4 million worth of assets belonging to Tate over the past week.

Among the 29 seized assets are motor vehicles, luxury watches and sums of money in several different currencies, the country’s Asset Recovery and Management Agency (ANABI) said.

Ioan Gliga, a lawyer for the Tate brothers, said he considered the ruling Friday as ‘totally unjustified.’

‘Only an hour ago, the session was closed and the file has 20 volumes,’ he said, ‘I find it very hard to believe that someone has the physical capacity to study the file in such a short time, as only yesterday it reached the tribunal.’

Ramona Bolla, a spokesperson for Romania’s anti-organised crime agency, DIICOT, told The Associated Press that prosecutors requested the second 30-day extension Thursday to keep all four in detention while the investigation continued. A judge approved the request Friday,’ she said.

The judge’s decision at the Bucharest Tribunal came after all four lost an appeal last week in a Bucharest court against a judge’s December 30 ruling to extend their arrests from 24 hours to 30 days.

The Tates are also likely to appeal Friday’s extension.

Andrew Tate made headlines the week of his arrest for a Twitter interaction with Swedish climate activist Greta Thunberg, who told Tate to get a life after he tweeted about his numerous cars ‘and their respective enormous emissions.’