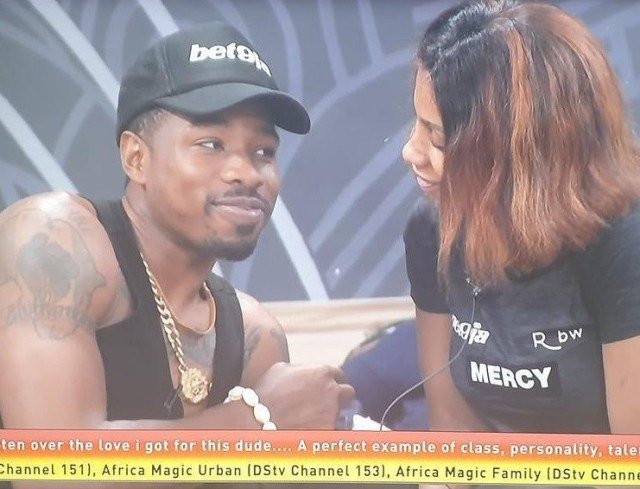 BBNaija housemates that include Mercy, Ike, Khafi, and Gedoni have expressed deep affection for one another after 4 weeks of meeting one another.

Mercy and Ike set the pace for other housemates after they became an item barely 14 days of being together in the Big Brother Naija house.

Though Mercy and Ike didn’t see it coming, the lovebirds have grown to like each other so much that they are known as an item in the house.

Viewers of the BBNaija show have had different acronyms for the season four’s first couple. Some prefer ‘MerIke’ while others prefer to call them ‘Icy’.

Though both lovers have their eyes fixed on winning the prize money of N30 million and another N30 million worth of prizes, they have also allowed cupid to strike their hearts.

Recently, trouble reared its ugly head in their relationship when Mercy tried to spite Ike by engaging in a raunchy dance session with – now evicted housemate – Tuoyo. And Ike had to talk to his ‘brothers’ in the house.

However, the couple was able to weather the storm in their 21 days old relationship and back stronger.

Another affair, which has become noticeable after Ebuka Obi-Uchendu made it public on live TV during the second eviction show is Khafi and Gedoni.

Though it took the exit of Kimoprah from the house to get Gedoni out of his shell, he has since displayed public affection for Khafi.

Khafi readily tells whoever cares to listen that she’s in love with Gedoni. So in love is the UK trained police officer that she can’t get her hands off Gedoni. At the slightest contact, she’s either touching him or running her hands through his head or sitting on him.

Last Saturday, while Tacha was ranting after Mike mistakenly spilled cake on her, Khafi and Gedoni were lost in a world of their own. The two were caught kissing passionately and stealing the moment to enjoy each other’s warmth.

Another breeding ‘couple’ in the house is Nelson and Esther. The two have not gone public with their relationship but the signs show that they have feelings for each other.

In another twist, Frodd seems to be a partial stumbling block in the seeming relationship even after Esther had made it clear to him that they can’t be anything more than friends.

Frodd’s feelings for Esther has seen him despising Nelson, who isn’t bothered that Frodd keeps breaking his heart by expressing his love for Esther without reciprocation.

Nelson and Esther, in recent time, have been enjoying each other’s company. When Nelson was the Head of House, he had some ‘me-time’ with Esther and this was returned when Esther emerged the Head of the House.

Both housemates are biding their time but viewers believe that cupid has struck their hearts.

The 16 remaining housemates still have 10 weeks to survive Biggie’s antics and celebrations. Also, the coming weeks will determine which of these relationships will last the test of time.