Emmanuel's Blog
Home Lifestyle Self Development Choose An Animal And We Will Reveal The Darkest Aspect Of Your... 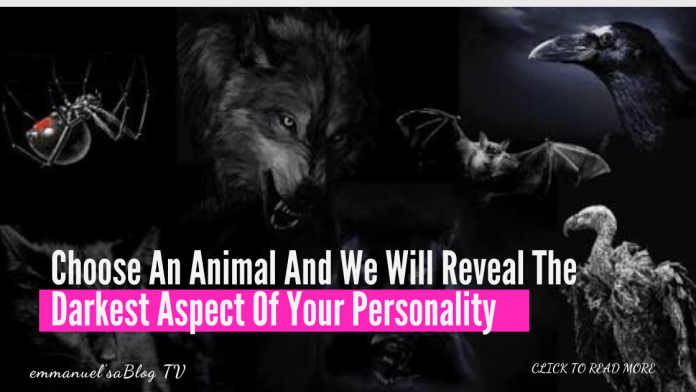 The black widow is a spider known for its venomous bite and ability to feed on their own mates. This is not just it, they also have a dark act of laying traps in form of webs and lying in wait as their prey falls into it. When this happens, they inject the prey with their venom and wait for them to die before they consume them.

If your choice was the black widow, then you have an underlying personality which can get really dark. This dark personality is what makes you very dangerous and unpredictable. You have the ability to lure your opponent into a trap and then go for the kill. By the time you are done with them, there would be hardly be anything left.

For centuries, the cat has been associated with the dark arts and even with death. They have been seen as a symbol of many things mysterious and dark, even in ancient Egypt. The cat can be playful when it wants to be, but it can quickly turn feral when threatened. This adds to its mystery and darkness.

If you had chosen the cat as your pick, then you have an air of mystery around you. You can be as sweet as possible, like a little kitten, you are also smart and patient. But when you are pushed, you can become the personification of evil itself.

One of the most misunderstood and mysterious wild animal ever known the wolf is one animal that has been associated with a lot of deaths and rage. Everyone who hears about the wolf believes that it is all about attacking people and mauling them to death, but the truth is that a wolf will never attack unless it has been threatened, neither will it kill unless it has to. The thing about its attack is that it attacks only in its own territory.

If your pick was the wolf, then you are mysterious and of course dangerous. You do not attack without a cause, and only become lethal when you have no choice. You wait for your opponent to find themselves in your trap before you pounce on them and go in for the kill.

Unlike the other bigger cats, the black panther instills a different level of fear in its victims when mentioned. The black panther is known to be very proud and protective and also dangerous when doing so. They are very silent creatures and always tend to lurk in the shadows. They are also very unpredictable and deadly.

Choosing a black panther means you are a person of great mystery. On the good side, it means you are extremely protective of people you care about, and you will go to great lengths to protect them including being brutal. Your dark side is one that should not be messed with.