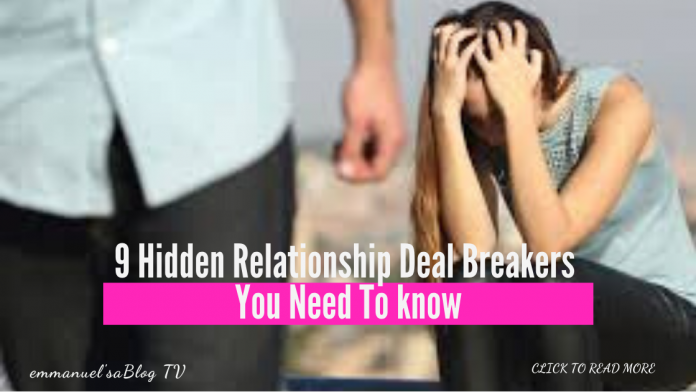 This is without a doubt, the most common relationship deal breaker ever. When you are in a relationship with someone, there is really no need to go outsourcing for whatever it is you could want, unless you are in an open relationship. Cheating on your partner is enough to make them call of the entire relationship because of the feeling of betrayal they feel.

While this may seem like such a trivial issue, but consistent lying can eventually turn out to be a relationship deal breaker. When you are known by your partner to always lie, it is difficult for trust to exist between you two, and gradually, this eats away at what your partner feels for you, until a split becomes inevitable.

Read: 9 Ways To Own Your Shadow Before It Owns You

In plain terms, it means you or your partner places much value on themselves and their needs first before the other. Being in a relationship means you should be able to make sacrifices, and do things with the other person in mind. When one person is always putting his or her own needs ahead of the other, it is an unmistakable sign of selfishness, and can lead to the end of the relationship.

It does not only have to be physical before you realize it is an abuse. An abuse can be mental as well as psychological. Any action exhibited by your partner that makes you feel less of yourself is an abuse, and it takes a great deal of courage to know when you’re being abuse. Once it is discovered, it will certainly cause one party to break away.

Being in the same boat with someone is probably the best feeling ever. And by boat, I mean having the same mindset towards something and being positive. Being in a relationship with someone who is constantly not in the same page as you can be destabilizing, especially when the other person is always being negative to your positivity.

Interest topic: Here’s How to Read 9 Aura Colours And The Meaning of Each Color

One of the biggest, but underrated relationship deal breaker is the act of cruelty. It may not be just to another person, but being cruel to people, animals, family and even your own partner can be a cause for breakup, even when we do not know it.

Now we do not expect you to be stagnant all the time. There are bound to be changes in our behaviors from time to time. However these changes should not be ones that can end up making people question our integrity or actions. A good example is when your partner acts all nice and caring one minute, and then bitter and resentful the next. This change is enough to make you rethink the whole relationship.

Being in a relationship with someone requires that you both find time to spend together. Make each other feel loved and wanted. However, when you feel like your partner is never interested in spending time with you, it could leave you wondering whether or not you are wasting your time with them. If it certainly feels that way do not hesitate to let go.

Interest topic: Pick a Symbol We Will Tell You Which Phase of Life You Have Entered

Every normal relationship experiences fights from time to time. However, when it becomes a regular occurrence, then there is a problem. If you find out that you’re both clashing over insignificant issues on a regular, perhaps daily basis, or that you are simply doing all he wants to avoid issues, then you probably shouldn’t be together at all.

8 Signs That You Love Him

5 Things to do for your husband everyday

Breaking The Cycle of Abandonment