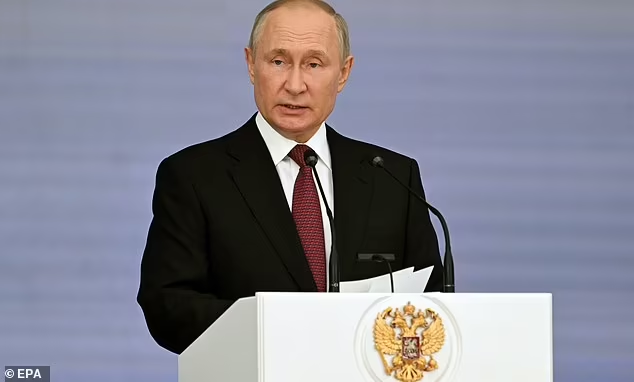 Russian President Vladimir Putin was expected to give a speech at 6pm London time from Moscow potentially announcing the official declaration of war in Ukraine to defend Russian-occupied territories, but kept the world waiting on Tuesday night.

Russian news channel that announced the speech deleted their posts around two hours after the Russian leader was set to begin what would have been his first international announcement since the country’s invasion of Ukraine on February 25.

It appeared as though the Russian leader had canceled his speech, pushing it back to Wednesday, according to a Telegram account run by political analyst Sergei Markov, close to the Kremlin.

‘They can’t even mobilize a speech,’ said one observer, mocking the apparent cancellation.

‘Rumour has it that Putin’s speech has been delayed due to his long walk from the end of the table to the press room,’ joked another.

The speech will take place at 6am London time (8am Moscow time) on Wednesday, according to Forbes Russia, which cited two sources allegedly from the Kremlin administration saying the speech will be broadcast ‘when the Far East wakes up’.

The news comes after Dmitry Medvedev, a staunch Putin ally, vowed that ‘all forces of self-defense’ will be used to protect what he called ‘Russian territory’ — hinting at an escalation in Ukraine.

Moscow’s parliament then passed new laws paving the way for Putin to end his ‘special military operation’ and officially declare war, allowing him to mobilize Russia’s massive population into the army.

The move could herald a new phase of the conflict involving weapons and tactics the Kremlin has so far held in reserve.