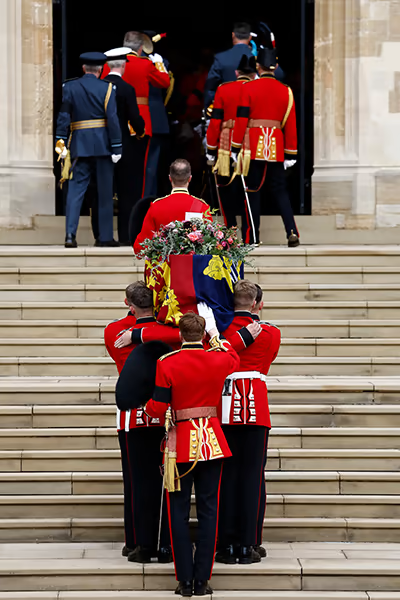 The late monarch was laid to rest in the King George VI memorial chapel alongside her beloved husband, Prince Philip, and her family, King George VI, the Queen Mother and Princess Margaret.

Following her burial, the ledger stone that lay next to the tomb was updated and now carries their names as well as the year they were born and the year they died.

During their lives, all four royals were members of the Order of the Garter, the highest honour that can be given. It is limited to only the monarch, Prince of Wales and 24 other living members.

Although the Queen’s sister Margaret is buried alongside them her name doesn’t feature on the ledger stone as her ashes are interred inside the wall.

Before the Queen was buried in the memorial chapel, Philip’s body lay in the Royal Vault. It was moved there ahead of the funeral so that the Queen could lie next to him.

Windsor Castle is currently closed to the public, and it is expected to reopen on 29 September.

Although the national mourning period has concluded, the royal family is expected to continue mourning for a further seven days.

King Charles III, the Queen Consort and other members of the royal family will observe the mourning period along with royal household staff, representatives of the royal household on official duties, together with troops committed to royal duties, which means we are unlikely to see them carry out any public engagements in the coming days.