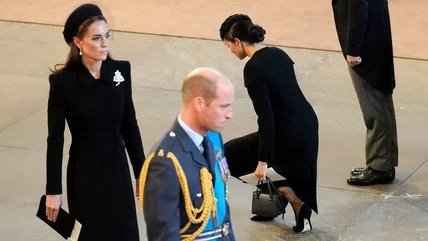 After the Duke and Duchess of Sussex stepped down as working members of the royal family, they made it abundantly clear that they bore no ill will towards Prince Harry’s grandmother by making a grand gesture: They named their daughter Lilibet, a family nickname for Queen Elizabeth II, per BBC News.

But Meghan Markle and Harry’s bombshell interview with Oprah Winfrey undeniably put a strain on their relationship with the royal family. The couple accused an unnamed royal of engaging in racist behavior and alleged that Kate Middleton made Meghan cry ahead of her wedding to Harry.

The claims ruffled a few royal feathers, and the queen herself released a statement that seemed designed to cast doubt on the couple’s accusations. “While some recollections may vary, they are taken very seriously and will be addressed by the family privately,” she said, per People.

But Elizabeth also let it be known that she had no interest in cutting her grandson and his family out of her life completely. “Harry, Meghan and Archie will always be much-loved family members,” she added. Proof of this came the following year during the queen’s Platinum Jubilee.

While she was unable to attend many events due to her declining health, Elizabeth did make time to meet her namesake for the first time, Us Weekly reported. And Lilibet’s name wouldn’t be Meghan’s last tribute to Her Majesty — the way the Duchess of Sussex paid her final respects to the queen left many social media users in awe.

During Queen Elizabeth II’s procession in Westminster Hall, Meghan Markle has photographed curtsying in front of Her Majesty’s coffin in a final farewell. The gesture moved many on social media, who applauded the act of respect and how expertly the Duchess of Sussex executed the dip.

“Meghan Markle did that deep curtsy in heels then easily got up and walked away. Respect to her and her knees,” tweeted one fan. “My girl hit that curtsy. So classy, elegant, and respectful,” wrote another admirer. Meghan’s critics even had to begrudgingly admit that she nailed the gesture. “I’m not the biggest fan of Meghan Markle but fair play, that was a damn good curtsy,” read a third tweet.

Meghan’s acute-angled knee bend seemed to be a callback to her first encounter with the late queen. In her interview with Oprah Winfrey, the Duchess of Sussex recalled how Prince Harry didn’t think to ask her if she knew how to curtsy until she was moments away from meeting his grandmother for the first time.

Sarah Ferguson, Duchess of York gave Meghan a crash course in how to properly curtsy before the actor had to put on a performance that you’d think would be an unforgettable moment in her life. However, this wasn’t the case. “Apparently, I did a very deep curtsy — and I don’t remember it,” Meghan revealed.