Emmanuel's Blog
Home Royal Family Do The Princes, William And Harry, Have A Close Relationship With Their... 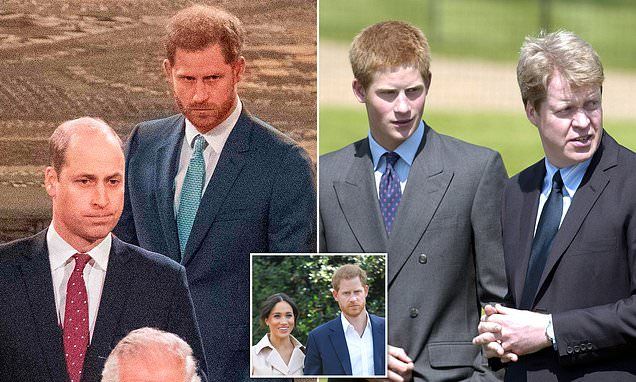 When it comes to Prince William and Prince Harry, understandably it’s their dad’s side of the family that gets most of the headlines.

Their paternal grandmother is Queen Elizabeth II, so when major milestones occur, it’s the monarch’s rules—the official and the tacitly understood—that have been set in place during her historic reign that tend to monopolize the conversation.

Plus, the queen has four grown kids, eight grandchildren and eight great-grandchildren, as well as a sprawling tree of cousins and their progeny. With so many royals to keep track of, it can be easy to forget that that’s only one half of William and Harry’s family.

The Telegraph has reported that their aunt Lady Jane Fellowes, one of Princess Diana’s two sisters, was among the first people to visit Harry and Meghan Markle following the birth of their son, Archie Harrison Mountbatten-Windsor, on May 6—meaning, she met Master Archie (as the title-less little chap will be known for now) before William and Kate Middleton were able to get there.

But the expediency with which Lady Jane got there isn’t particularly surprising. The Spencer side did, after all, promise to look after William and Harry in their mother’s stead, to do their best to balance out the inevitable demands of royal life with the normalcy that Diana wished for them—and the brothers never forgot it.

In turn, Harry and William have enjoyed a more private but equally enduring bond with their mother’s side of the family, and Harry—only sixth in line to the throne and therefore a tad less tethered to the Windsor side than future king William—has kept the Spencers especially close.

For instance, his maternal aunts and uncle were included by name in the initial birth announcement from Buckingham Palace sent last week, which read, “The Queen, The Duke of Edinburgh, The Prince of Wales, The Duchess of Cornwall, The Duke and Duchess of Cambridge, Lady Jane Fellowes, Lady Sarah McCorquodale and Earl Spencer have been informed and are delighted with the news.”

“Really very lovely news today – many, many, congratulations! (Good to have another Taurean in the family….),” Diana’s brother, Charles, 9th Earl Spencer and proud Taurus, tweeted as well, noting Archie’s zodiac sign, which he shares. (Diana was also very into astrology.)