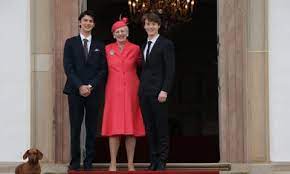 It was announced last Wednesday that Queen Margrethe II has decided that four of her grandchildren – Prince Nikolai, Prince Felix, Prince Henrik and Princess Athena – will be stylized as the Count and Countess of Monpezat from the start of 2023.

In the interview, Prince Joachim was visibly emotional whilst answering questions. The pair revealed that they haven’t yet spoken to the Queen or his older brother Crown Prince Frederik and his wife Crown Princess Mary, who came out in support of the decision on Friday, and that their relationship remains to be complicated.

According to the publication, a French woman approached the royal pair during the interview to tell them their children will always be Princesses in their eyes which left “the couple speechless and they both [began] to cry because they [were] so touched.”

It is thought the decision was made by the Queen in a bid to slim down the monarchy.

Addressing this in the interview, Joachim said: ” The reality must still be whether you modernize or slim down, it must be done in a proper way. It’s about children. Orderliness and children. It is a very heavy matter.”

Despite the decision, the couple confirmed that they are not thinking of leaving the Danish royal house. Instead, they will continue their work in their own way – even if the family is divided like never before.

The tearful exchange came after Joaquim spoke out about the news to Ekstra Bladet whilst at the Danish Embassy in Paris on Thursday.”We are all very sad,” he said. “It’s never fun to see your children being mistreated like that. They themselves find themselves in a situation they do not understand.”

The royal house had previously stated that Joachim had been informed of the decision in May – but he contested that.

“I was given five days’ notice,” he stated. “I heard you were told back in May. Is that not correct?” the journalist enquired.

“In May, I was presented with a plan, which basically stated that when the children each turned 25, it would happen. Athena turns 11 in January,” he responded, clearly emotional.