Emmanuel's Blog
Home Royal Family The Heartfelt Gift The Queen Gave To The Queen Consort And Her... 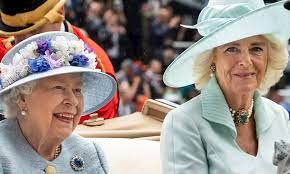 Writing in The Spectator, Andrew revealed that Her Majesty had gifted the happy couple with a corgi, called Windsor Flame, which he revealed was “wonderful, intelligent and brave”. The late monarch later gave them another corgi, named Danny, who was the opposite of these qualities and Andrew even wrote that the Queen wasn’t happy to get the dog back when Andrew and Camilla split.

Andrew also shared how close the late royal was with her dogs, and revealed the time that animal psychologist Dr. Roger Mugford once quipped: “There is barely anyone on the planet who could achieve that control over their dogs.”

He also spoke about the Queen’s love of horses and knowledge of horse racing, explaining: “Her knowledge of breeding was second to none and the wellbeing of her horses was very important to her.”

He ended his sweet piece by posting: “Our late beloved sovereign, as always, got it right. We will not see her like again. May she rest in peace, ideally surrounded by dogs and horses.”

It wasn’t just the Queen Consort who had a close bond with Her Majesty, but so did Andrew as he served as a page boy at the Queen’s wedding. Meanwhile, his father was a close friend of the Queen Mother.

Since ascending the throne in 1952, the Queen had owned more than 30 Corgis in her lifetime. At any given point, she had up to ten — and tolerated no less than the royal treatment for them.

The Queen’s father, King George VI, arguably sparked Elizabeth’s obsession with Corgis after she was gifted her first pup Susan on her milestone 18th birthday in 1944. Their bond proved so strong that Her Majesty even snuck her four-legged friend on her honeymoon in 1947!