Emmanuel's Blog
Home Royal Family Was Prince Harry Distraught at the Queen’s funeral because he disappointed his... 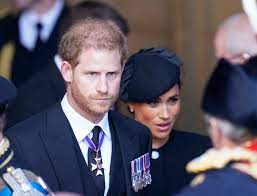 Ever since he stepped down and relinquished his royal status as a member of the Royal Family, Prince Harry has been mostly excluded from major royal events.

The funeral of Queen Elizabeth changed the situation as Prince Harry and his wife Meghan Markle fully participated in the funeral ceremony of the late Queen.

Although Prince Harry and Meghan were both present at the funeral, it did not seem as though they were welcome, as it almost looked like Prince Harry was somewhat upset or distraught about the situation.

From the pictures that were taken at the funeral, it was obvious that the atmosphere at the funeral was solemn and sad. However, the look on Prince Harry’s face showed not just solemnity, but something more, perhaps anger?

While he may have looked that way because of how he felt about the Queen’s death, the feeling that his grandmother, the Queen may have been disappointed at him pulling out of his position as a member of the working Royal Family may have dawned on him.

Although he was not excluded from the funeral ceremony, Prince Harry was excluded from being a part of the official portrait that was taken during the mourning phase.

Furthermore, he was not allowed to wear the military uniform like other working Royal Family members like Prince William and King Charles, but wore a suit and tie instead for the funeral.

Additionally, Prince Harry and Meghan were seated in the second row with his cousins Princesses Eugenie and Beatrice, behind his father, King Charles, the Queen consort Camilla, and Prince William and his family in the front row.

It is safe to say that the reception Prince Harry got during Queen Elizabeth’s funeral may not have been a surprise to him, however it may have caused him to wonder if his late grandmother would be disappointed at him for his decision.