Emmanuel's Blog
Home Entertainment Celebrity Why Was Joaquin Phoenix So Weird When He Was Interviewed By David... 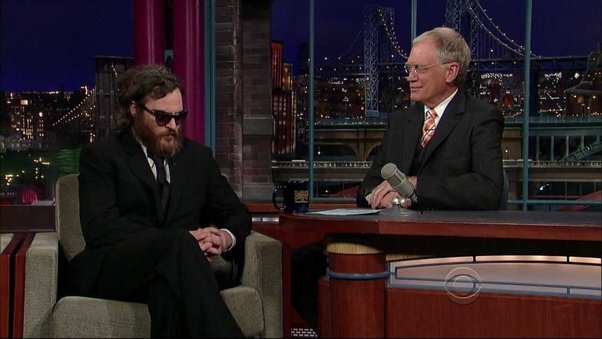 I believe you’re talking about the infamous 2009 interview where Joaquin Phoenix appeared to be in the middle of a meltdown.

This interview went all kinds of wrong. Phoenix had a long beard and hair, sunglasses and he mumbled and chewed gum throughout the interview.

He looked like he didn’t want to be there as his mind seemed to be elsewhere and he was acting very erratically and even stuck his gum in Letterman’s desk.

David Letterman was clearly confused with the situation but he kept on going with the interview, asking him about his decision to quit acting and starting a rapping career. He even gave him plenty of compliments and said he hoped he would consider going back to acting… until he started to lose his patience.

This is probably one of the most awkward interviews of all time, and it’s so great to watch Letterman being put to the test.

Now, why was Joaquin acting this way?

In 2009 Joaquin Phoenix was starring in a mockumentary, directed by Casey Affleck, where he played himself and it showed him quitting acting and starting a rapping career.

To make the mockumentary look real, Joaquin let his hair and beard grow and he made himself look as if he himself was having a public meltdown.

He publicly announced he was quitting acting and starting his new career, and the public and media ate it up not knowing it was all a farse for his film.

And going on Letterman helped even more, as people were really confused as to what was happening to him, including Letterman himself, who hadn’t been told that he was acting.

Click on the link to watch for yourself: https://youtu.be/97pPMzESi6s

Note: The below article was taken directly from BBC News in 2010: 18 months after the interview he went back to the show and he explained and apologized to Letterman.

“Actor Joaquin Phoenix returned to David Letterman’s Late Show on Wednesday to apologize for his strange behaviour when he last appeared as a guest. The star seemed confused and incoherent during the interview in 2009, but it has since been revealed that it was part of an act for a mock documentary.

Phoenix, who insisted the US host had not been in on the joke, said: “I hope I didn’t offend you in any way.”

I’m Still Here is about Phoenix quitting acting to become a rap star. Last week actor Casey Affleck, who made the film, admitted that it had been staged.

Over the last two years, Phoenix has behaved strangely in public, leading fans and critics to wonder whether he was documenting a breakdown on film.

Speaking to Letterman, he said: “You’ve interviewed many, many people and I assumed that you would know the difference between a character and a real person, but I apologize.”

Unlike his appearance last year when he turned up with a long beard and unkempt hair, Phoenix was clean-cut and shaven.

Referring to the interview, Letterman said it was “like you slipped and hit your head in the tub”.

“I was eager to thank you for the opportunity and I was really eager to get off the show,” Phoenix said.

The film, which was premiered at the Venice Film Festival, was released earlier this month in the US.”