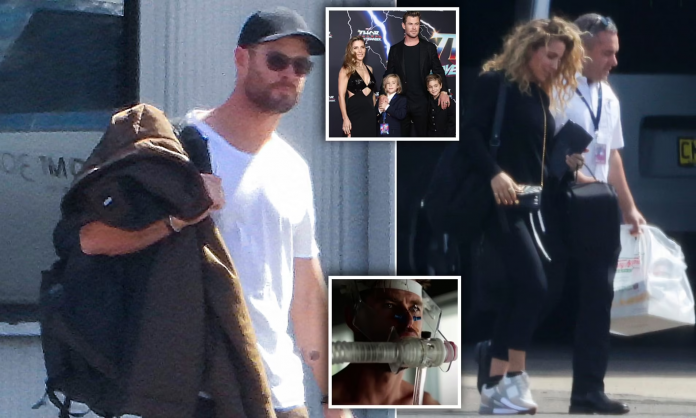 Chris Hemsworth has revealed he will be taking a break from acting to spend time with his family days after revealing that he has high risk of developing Alzheimer’s.

The Thor star, 39, told Vanity Fair, he has decided to take ‘time off’ after filming a confronting episode about death on his new Disney+ docu-series Limitless.

‘Doing an episode on death and facing your own mortality made me go, “Oh God, I’m not ready to go yet”,’ he said.

‘I want to sit and be in this space with a greater sense of stillness and gratitude. And then you start talking about kids and family…’

Chris explained: ‘It really triggered something in me to want to take some time off. And since we finished the show, I have been completing the things I was already contracted to do.’

He said he has decided to have a ‘good chunk of time off’ with his wife Elsa Pataky and their three children – India, 10, and twin boys Sasha and Tristan, 8.

It comes after Chris discovered he is genetically predisposed to Alzheimer’s, causing him to confront his ‘own mortality’ while filming the show.

After having bloodwork done for the program, he was informed he is ‘between eight and 10 times’ likelier to develop Alzheimer’s than the general population, because he is one of only two to three percent of people with two copies of the gene APOE4.

‘Our hearts have been so heavy’ – Rapper Cardi B says she feels ‘hopeless trying to make Offset happy’ after the tragic death of...