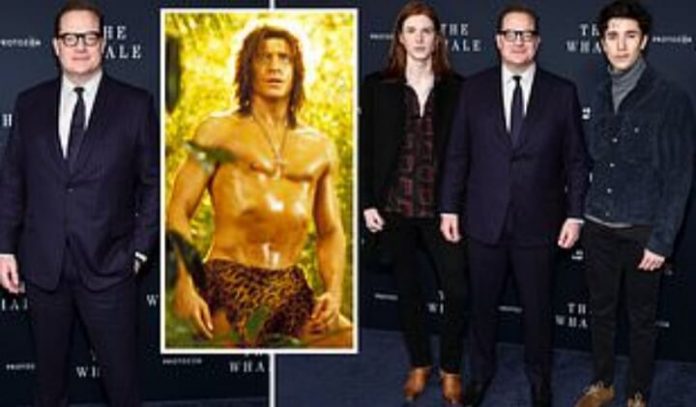 53-year-old Brendan Fraser hit the red carpet with his handsome sons Holden, 18, and Leland, 16 (from his marriage to Afton Smith), at a New York City screening of The Whale.

The teens looked just like their famous dad when he a young Hollywood pin-up in films like the 1992 hit Encino Man and 1997’s George of the Jungle.

He was also joined by his longtime partner, makeup artist Jeanne Moore at the Tuesday screening, held at Alice Tully Hall.

The father of two hit the red carpet in a dark blue suit with red pinstripes, as he also posed next to his on-screen daughter in The Whale, Sadie Sink, who opted for a strapless black dress and black pumps.

He also rocked black thick-framed glasses along with a white dress shirt and a matching dark blue tie for the red carpet event.

The actor completed his look with a pair of shiny black dress shoes for the new screening.