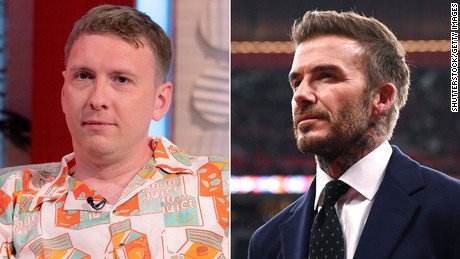 Before now, Lycett had set the former England footballer a deadline of midday on Sunday to withdraw from his role at the tournament.

If Beckham pulled out as a Qatar World Cup ambassador before the start of the event, Lycett was offering to donate £10,000 of his own money to gay charities.

And if Beckham did not, the plan was to shred it, along with what Lycett called the former England captain’s “status as gay icon”.

Beckham, who in 2002 posed for the cover of the gay magazine Attitude, saying he was “honoured to have the tag of gay icon”, has faced mounting criticism over his association with the Qatar tournament.

The value of the deal is disputed but some say he was offered £150m by the Gulf state.Lycett tweeted a video of the stunt just after midday, with the words “A platform for progress”, a Beckham quote about the Qatar tournament.

Dressed in rainbow feathers, he put what appeared to be two bundles of cash into a shredder before curtseying to the camera.

Lycett first posted a video on 13 November asking the footballer to reconsider his deal with the Arab country. “If you end your relationship with Qatar, I will donate ten grand of my own money (that’s a grand for every million you’re reportedly getting) to charities that support queer people in football,” he said.

“However, if you do not I will throw the money into a shredder at midday next Sunday, just before the opening ceremony of the World Cup and stream it right here. Not just the money, but also your status as gay icon will be shredded.”

Beckham has not yet publicly acknowledged or responded to the comedian.

The former culture secretary Nadine Dorries had urged the comedian to rethink before the stunt went ahead, tweeting:

“Shredding 10k will earn Joe Lycett far more than it will cost him and is in effect a paid-for publicity stunt which has worked.“

Job done. No one will think any worse of him now if he changes his mind at the last minute and donates it to a homeless shelter in time for Christmas.”

Lycett’s public stunt divided people online. Many showed support for Lycett under the hashtag #BendersLikeBeckham, but others were uncomfortable with destroying money during a cost of living crisis.

Some even questioned whether the money was real.

In the UK it is illegal to deface a banknote in any way (through the Currency and Banknotes Act of 1928), but it is not illegal to destroy a banknote altogether, for example through burning.

But if Lycett had burned the equivalent number of dollars in the US, or destroyed £10,000 of coins, he could have faced prosecution for his actions, as burning or destroying money in America is illegal, as is destroying coins minted after 1969 in the UK (according to the Coinage Act of 1971).