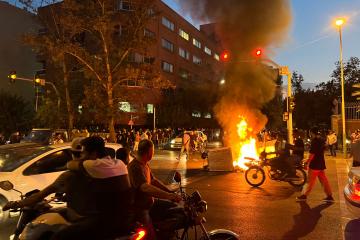 General Amir Ali Hajizadeh, an An Iranian general has acknowledged that more than 300 people have been killed in nationwide protests sparked by the death of Mahsa Amini in police custody.

In the first such admission by the Islamic regime, 300 people have died in over two months of protests.

The Islamic republic has deployed state security forces against what it labels “riots” that broke out after the 22-year-old died on September 16, three days after her arrest for allegedly breaching Iran’s dress code for women.

“Everyone in the country has been affected by the death of this lady,” said Brigadier General Amirali Hajizadeh of the Islamic Revolutionary Guard Corps.

“I don’t have the latest figures, but I think we have had perhaps more than 300 martyrs and people killed,” among them some of “the best sons of the country”, said Hajizadeh.

22-year-old Mahsa Amini, who died in police custody after being arrested for not following the country’s strict hijab laws.

Eyewitnesses say she was beaten in a police van, but the police denied the allegation.

Daughter of No. 2 House Democrat arrested during clash with Boston cops