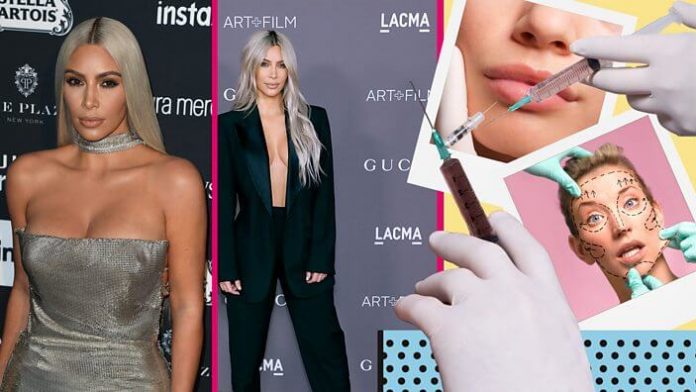 The internet broke when Kim Kardashian made her first appearance with a much bigger backside than was originally known of her. Quite Frankly, her as* is the major reason why she became very popular in the first place.

When she gained the popularity because of her as^, she became the symbol of BBL, and even became a yardstick for beauty in women.

Her enhanced figure caused a lot of girls and women feel somewhat inadequate and uncomfortable in their bodies, to the point of going under the knife to get their body enhanced.

When you take a look at Kim’s as^, it takes a great deal of courage to feel good about yourself and not feel inferior. However, all that was the case before recent images of Kim surfaced.

Kim may have started off looking fake and unwittingly making other girls feel bad about themselves, but her recent photos showed her thighs and as^ looking the same, but with cellulite.

When the first images of Kim after her procedure surfaced, she did a n.deshoot of her body covered in oil. The image portrayed perfection in itself, and of course using Kim’s body.

That image drove a lot of women and ladies under the knives of plastic surgeons and BBLs, all in a bid to look like Kim and achieve the world’s view of a perfect body.

Presently, the look of Kim’s as^ and legs in cellulite proves one thing above all else, and that is we are all human after all. No matter how much alterations we make to our own bodies, the undeniable trace of a natural human body will remain.

It is quite sad and unfortunate that we live in a world where the size of a woman’s b00bs and as^ is all it takes to call her beautiful or not. It is appalling that most women regard famous celebrities who have undergone beauty alterations as the standard for feminine beauty.

Her fans has inceeased since the Axx Enlargment

Below photo seems photoshopped but what can we say

The last photo gives you some level of common sense between nongreedy and greedy enlargement.