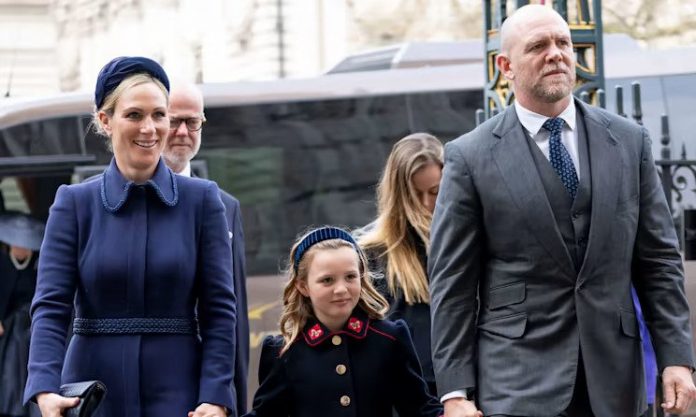 The couple have been happily married since 2011 and together share three children: daughters Mia, eight, and Lena, four, and their one-year-old son Lucas.

Mia has already established herself as quite the character, often stealing the show when she makes public appearances.

And her cheeky personality shone through once again when mum Zara sat down to talk to Vogue Australia.

Little Mia made an impromptu appearance part-way through the interview, approaching Zara with a scrap of paper tucked up under her nose. She then asked her mother to admire her ‘moustache’ before it fell to the floor in pieces.

“Now, who is going to pick that up?” Zara asked as her eldest ran off. The publication then notes: “Tindall returns to listing her schedule – the Magic Millions in January 2023 and 2024, and hopefully the Olympics – before eventually stooping down and picking up the paper.

“‘I know, it was annoying me,’ she says laughing, perfectly balancing her equestrian roles with that of being a loving mum.”

“It’s bad because every time I think, ‘I can’t let them win’,” he admitted. “”But] it’s a balance. I always let Mia win occasionally, we have races up the stairs and stuff.

“But I always make sure I beat her a few times because she absolutely goes mad – she’s so competitive. But it’s a part of making sure she also understands she has to be able to take losing every now and again.”