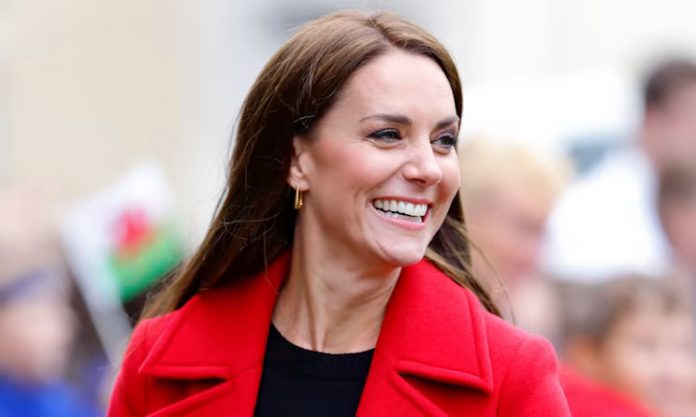 The mother-of-three sparkled in a bridal white Jenny Packham ‘Elspeth’ cape dress, which was adorned with sequins. She completed her show-stopping look with the Lover’s Knot tiara – a favourite of the late Princess Diana.

Her earrings were also a nod to her late mother-in-law. Kate chose South Sea pearl and diamond drops that previously belonged to Diana, while she also wore the Queen’s pearl bracelet to match her tiara.

Eagle-eyed fans immediately recognized the earrings; most recently Kate wore them to the annual Remembrance Day Service, held at the Cenotaph.

The statement jewels are easily identifiable thanks to a statement curve of various cuts of diamonds, with a cluster of marquise-cut stones in the centre, from which hangs a single pearl.

However, there was a noticeable difference between the two outings. For the state banquet, Kate wore the earrings the other way around, prompting fans to question whether she had made a sartorial slip-up.

It’s highly likely that the earrings can be worn both ways though, with no ‘right’ or ‘wrong’ way to wear them.

Kate put a great deal of thought into her outfit for the state banquet – her first since becoming the Princess of Wales.

The Princess’ choice to wear white for the formal occasion was likely a conscious choice and one which follows in the honour of Queen Elizabeth II, who always wore white to state events.

We previously spoke to colour expert Gabi Winters from Chromology to find out why the royals lean towards the neutral hue at formal royal events.

Gabi said: “White is the colour of peace and the colour of new beginnings, so coincidentally the psychological meaning behind this uncommon colour choice is very fitting when it comes to renewing and celebrating diplomatic ties between different nations.”

She added: “Scientifically speaking white contains an equal balance of all the colours of the spectrum, so naturally, white’s most fundamental feature is equality, neutrality and independence.”

Photos: Princess Kate Impresses On Solo Visit And Princes George And Louis Would Be Proud