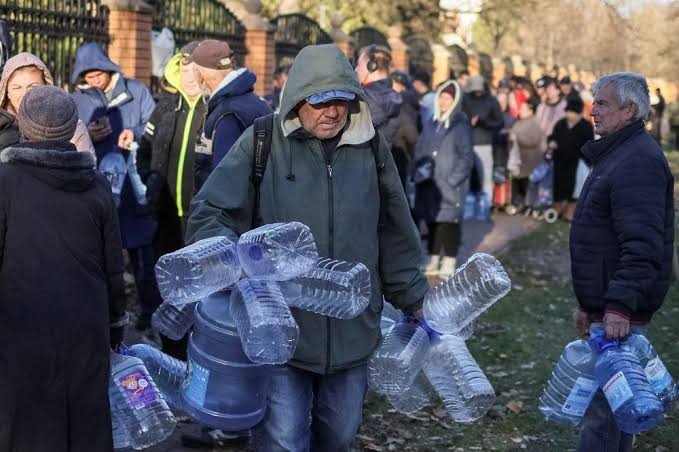 Water shortage is the latest in a string of hardships now woven into the fabric of daily life following the Russian invasion.

Cars queueing up for hours waiting for fuel with Russian attacks on refineries and storage facilities battering supplies across the country have become the order of the day in Ukraine.

Russian attacks on Ukraine have disrupted electricity across large parts of Ukraine, killing dozens of people and leaving other places without access to clean water.

Every day, Mykolaiv’s residents lug plastic containers by hand or in carts to water distribution points across the city that sits at the sweeping confluence of the Dnipro and Southern Buh rivers.

“This is the way we live,” lamented Yaroslav, 78, a retiree who worked at the Chernomorsk Shipbuilding Yard, as he queued behind Sveta.

“We live through one day and there is no joy and then there is the next day.”

After nearly a month without water, city officials were forced to begin pumping yellowish, salty water from the Southern Buh River estuary to clear sewers and let residents flush toilets and wash. It emits a pungent industrial odor, foams in toilets, and makes soap hard to lather and rinse.

Worst of all, it is corroding holes in the city’s pipes.

Dydenko has called the situation ‘catastrophe’ as he accuses the Russians of refusing requests for a ceasefire so that the freshwater intakes could be inspected and any repairs made.

Bottles of water are available in stores, but many residents, impoverished by war, depend on bottled water donations from abroad, even as pools of water snake onto streets from leaking mains.