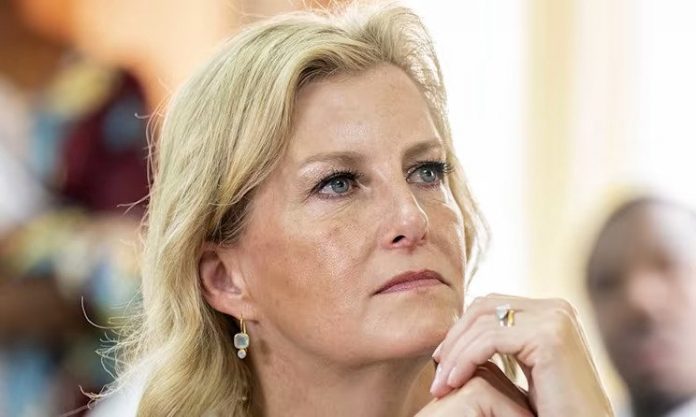 During her emotional address, the mum-of-two touched on her recent visit to Panzi hospital in the Democratic Republic of the Congo. Reflecting on their holistic approach and incredible staff, Sophie gushed: “It was one of the most amazing visits I have ever done.”

Sophie opted for a sophisticated outfit featuring a tailored black blazer and an autumnal golden-brown silk shirt. She elevated her outfit with a pair of drop earrings and a touch of flawless makeup. As for her hair, the royal secured her blonde locks in a clasp and gently curled the ends for a feminine finish.

Ukrainian first lady Olena Zelenska was also present at the conference. Taking to the stage, the architect and screenwriter spoke of the horrifying abuse endured by Ukrainians at the hand of Russian soldiers. She described the violence as “the cruelest and animalistic way to prove their mastership… It’s coming from the top down.”

‘It was one of the most amazing visits I have ever done’ Countess of Wessex tells #psvi conference about her recent visit to Panzi hospital in DRC and talks movingly of their ‘holistic approach’ and the compassion of their staff.

Sophie’s moving speech comes after the 57-year-old visited DRC at the request of the Foreign, Commonwealth and Development Office. During her meaningful October trip, the royal met with survivors of sexual and gender-based violence in a bid to dismantle the ongoing stigma they continue to face.

It is a subject close to Sophie’s heart. She has campaigned on the issue for many years, traveling to countries including Kosovo, Lebanon, South Sudan and Sierra Leone to meet women peacebuilders and survivors of sexual violence.

Sophie said last year that hearing survivors’ stories of sexual violence has taken her to “some very dark places” during her work to raise awareness.

“Every story I am told is pushing me forward. I feel obligated to tell people this is happening – it is their story to tell and I support them,” she added.