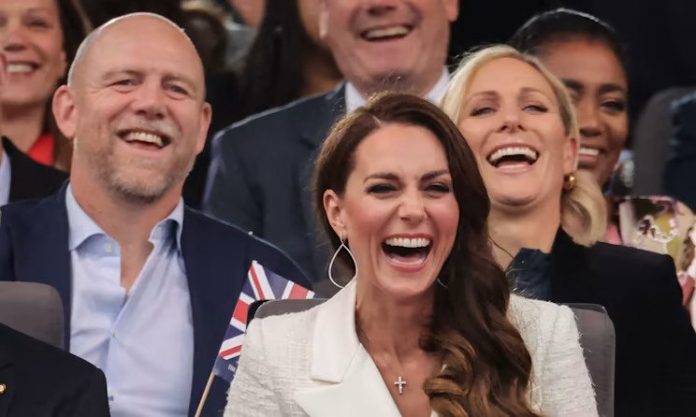 The 44-year-old former rugby player told his co-stars on the ITV show about the incident, which occurred on the dance floor at his wife Zara’s 70s-themed 30th birthday party, prompting much laughter.

Dad-of-three Mike narrowly missed out on a place in Sunday night’s final after becoming the eighth contestant eliminated from the ITV show. After leaving the camp in the Australian jungle, he was greeted by his wife, the King’s niece.

Appearing on Good Morning Britain on Monday, he addressed whether he knew how many members of the royal family had been watching him. He said: “No, I don’t right now but I’m sure I’ll find out at some point, Christmas is around the corner. We will see if some interesting gifts come underneath that tree. I don’t know.

“There’s some sense of humour kicking around in the family. So yeah, I’ll wait for some interesting gifts and see how many people were watching.”

On whether he knew if the Princess Royal had watched him recall his trouser-splitting incident on national TV, Mike replied: “No, I don’t think she was watching but I think Zara might have told her.

“But I’m pretty sure it’s probably etched into her memory banks for all the wrong reasons. So yeah, I’ll probably bashfully hide away from that one.”

In the jungle, the former rugby player had told his fellow campmates Seann Walsh and Babatunde Alésrhé that he was dancing with Princess Anne when his flared trousers ripped, exposing his boxers which had a rude message printed on them.

“I love a suit. My problem with suits is I over-exaggerate dancing at weddings… I rip a lot of suits, trousers and stuff,” he explained. “The old [expletive] drop gets me every time. I went to a wedding, ripped a suit, and they were like, ‘Oh my god, what are you going to do?’ I was like, ‘Don’t worry I’ve got a spare.’ They were like, ‘Who brings a spare suit?’ Someone who rips a lot of trousers brings a spare suit.”

Mike continued: “Zara had like a 30th birthday, it was a disco 70s-themed one. I was dancing on the dance floor, I had like flares on, full outfit but it was quite tight, nothing ever fits – rugby player’s bum and legs – so I was dancing with my mother-in-law and I did a [expletive] drop in front of my mother-in-law.

“Ripped my trousers, straight in front of her. It happened to be that the boxers that I had on at that time said ‘nibble my nuts’,” he said, prompting applause from Seann and Babatunde.