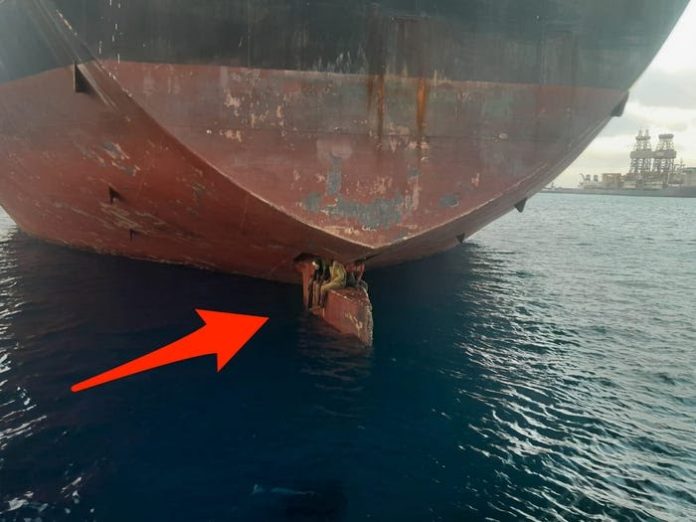 Europe sees its highest level of irregular migration in five years when three men survived an 11-day journey perched precariously atop the rudder of an oil tanker en route from Nigeria to Spain’s Canary Islands.

According to the ship tracking site Marine Traffic, the stowaways, straddling a narrow strip of metal and exposed to the elements, traveled on the Malta-flagged Alithini II, which left Lagos on November 17.

It was reported that the tanker arrived on Monday evening in Las Palmas, Gran Canaria — one of Spain’s Canary Islands, located off the coast of North Africa.

In a photo shared by the Spanish coast guard on Twitter, the three men sit on the sliver of the ship’s rudder that protrudes from the water, their backs hunched against the vessel’s hull.

A coast guard rescue boat picked up the men and brought them to the Las Palmas port to be treated by health services, the coast guard tweeted.

The survivors were from Nigeria, the Spanish government’s delegation in the Canary Islands told the Associated Press. One of them was still hospitalized Tuesday.

Txema Santana, a migration adviser to authorities in the Canary Islands, wrote on Twitter. “It is not the first and it will not be the last. Stowaways do not always have the same luck.”

“The survival odyssey is far beyond fiction.”

More than 165,000 irregular migrants, many of them seeking asylum, have arrived in Europe this year, the highest number since 2017, when 187,499 were recorded, according to the International Organization for Migration.

The journey of the three stowaways is an outlier in recent migration patterns to Europe.

What happened when Putin grabbed Obama’s tie? Was it a friendly chat?