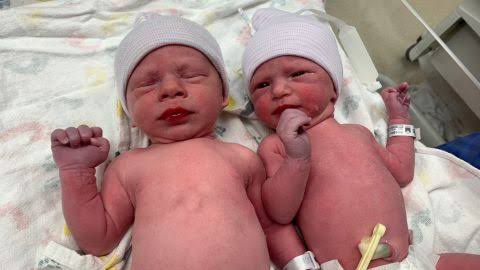 According to America’s National Embryo Donation Centre, twins born last month in the US may hold the record for being born from the longest-frozen embryos.

Lydia and Timothy Ridgeway were born on October 31, but the healthy twins from Texas have come courtesy of embryos that were donated 29 years and 10 months, CNN reports.

New parents Philip and Rachel Ridgeway, who have four other children aged 8, 6, 3 and almost 2, found the concept “mind-boggling.”

The happy father recalls: “I was 5 years old when God gave life to Lydia and Timothy, and he’s been preserving that life ever since,” Philip Ridgeway told CNN.

The embryos were donated to the National Embryo Donation Centre by an anonymous married couple, using the husband’s sperm and eggs of a 34-year-old donor, CNN reports.

The embryos were frozen on April 22, 1992. Almost 30 years later, Lydia and Timothy Ridgeway consulted with the National Embryo Donation Centre as they looked to have more children through IVF.

“We’ve never had in our minds a set number of children we’d like to have,” Philip told CNN.

“We’ve always thought we’ll have as many as God wants to give us, and … when we heard about embryo adoption, we thought that’s something we would like to do.

“After the 5 embryos were thawed, the couple found out 3 were viable. Rachel Ridgeway decided to have the remaining 3 transferred, she told CNN.

“You just showed me a picture of my three children,” she said. “I have to have them all.