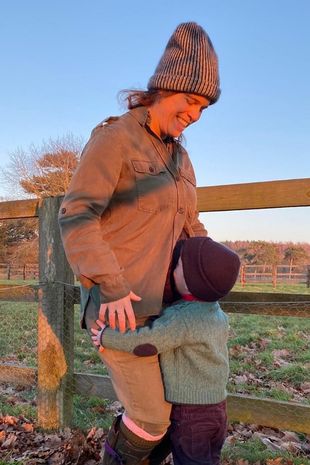 The royal baby will be 13th in line to the British throne and will be a plain Miss or Master.

Eugenie married Jack Brooksbank in 2018 and their son, August Philip Hawke Brooksbank, was born in February 2021.

Eugenie is the niece of King Charles III and the younger daughter of Prince Andrew and Sarah, Duchess of York, and the late Queen’s granddaughter.

‘The family are delighted and August is very much looking forward to being a big brother,’ said Buckingham Palace.

Announcing the news, Eugenie shared a family photograph of her son, August, kissing her bump.

Her mother responded to an Instagram post announcing the pregnancy with the words ‘Granny heaven’ and a heart emoji.

August, who is nearly two, was born at the exclusive Portland Hospital in central London.

He made an appearance at the Platinum Jubilee pageant celebrations last year wearing a Union Jack jumper as Eugenie bounced him on her knee as they sat in the royal box.

The new baby will be one place behind their older brother in the line of succession and one ahead of Prince Edward, the King’s youngest sibling.

She is married to Edoardo Mapelli Mozzi, who responded to the Instagram pregnancy announcement with two heart emojis.

Eugenie is not a working royal and does not receive funding from the Sovereign Grant.

The baby news comes after a difficult period for the royals following the publication of the Duke of Sussex’s tell-all memoir Spare.

Eugenie’s father Prince Andrew stepped down as a working royal in 2019 after a controversial Newsnight interview that addressed his relationship with the late convicted sex offender Jeffrey Epstein.

He was later stripped of his military titles and there have been calls for him to relinquish his remaining titles following an out-of-court settlement with Virginia Giuffre in the US.