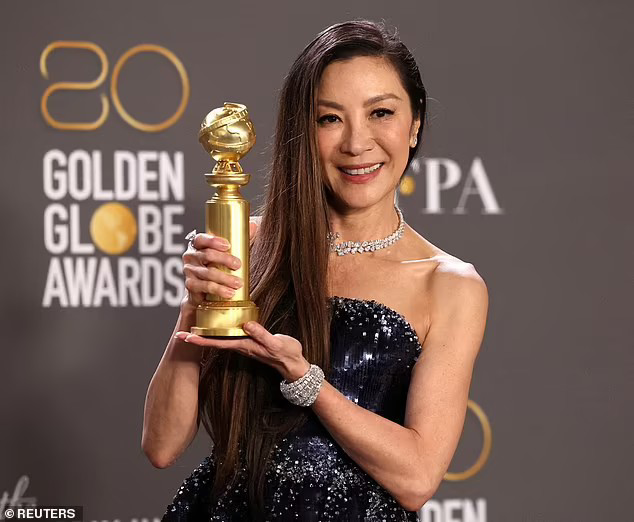 Michelle Yeoh, the Malaysian icon just made history as the first Asian nominated in the Best Actress category at the Academy Awards on Tuesday morning.

The Malaysian-born performer, who became a movie star in Hong Kong before successfully crossing over to the global stage, received her expected Academy Award nomination for her multifaceted role in A24’s Everything Everywhere All at Once, The Hollywood Reporter confirmed.

It is the first career Oscar nod for the beloved icon, 60, known stateside for her supporting (yet scene-stealing) turns in such films as Crouching Tiger, Hidden Dragon; Tomorrow Never Dies; and Crazy Rich Asians.

But for the Academy, the achievement is even more consequential.

‘It’s taken a long time. But I think this is more than me,’ Yeoh told The Hollywood Reporter on Tuesday after the nominations were announced, speaking of the historic nod.

Oscars’ best actress category is historically one of the awards body’s whitest and least diverse, certainly among the four acting races.

Women from the global majority represent a slim minority of nominees, with Halle Berry the only winner — more than 20 years ago — for Monster’s Ball.

However, until today, not a single woman who identifies as Asian — incidentally, the largest racial group on the planet — has been recognized as best actress by the Academy Awards.

Technicalities exist: Some recordkeepers consider Merle Oberon (1936, The Dark Angel) to be the first Asian best actress nominee, but she hid her ancestry (her mother was reportedly of partial Sri Lankan descent) and passed for white.

Likewise for double Oscar winner Vivien Leigh, who was born in British-colonized India and whose mother might have had partial Western Asian ancestry.

And although past nominee Salma Hayek and winners Cher and Natalie Portman all have claims to some Western Asian heritage (Lebanon, Armenia and Israel/Russia, respectively), none has identified as Asian.

Interestingly, Yeoh’s EEAAO character — the immigrant laundromat owner Evelyn Wang — is not the first Asian character to be recognized in an Oscar-worthy lead actress performance.

That distinction goes to The Good Earth’s hardworking Chinese wife O-Lan, whose portrayer earned Oscar gold all the way back in 1938 at the 10th Academy Awards: the 100 percent white actress Luise Rainer.

Yeah also accepted the Best Actress award from the National Board of Review, saying in her acceptance speech, ‘I am so incredibly proud to be the first Asian actress in 45 years to receive this honor.

‘I hope it means that Hollywood and the filmmaking community recognizes what a watershed film this is, and all the things I’ve stood for and tried to accomplish in my four-decade career,’ she added.

Yeoh has also taken home best-actress accolades from the Saturn Awards and Hollywood Critics Association for her role in the movie, and was nominated for outstanding lead performance at the Gotham Independent Film Awards.

She is also up for best lead performance at the Film Independent Spirit Awards, which will be held on March 4.

Leonardo DiCaprio, 48, is seen out with actress Victoria Lamas, 23 for the THIRD time in a week