Emmanuel's Blog
Home Lifestyle Astrology The Things He Will Do That Reveals He Has A Crush On... 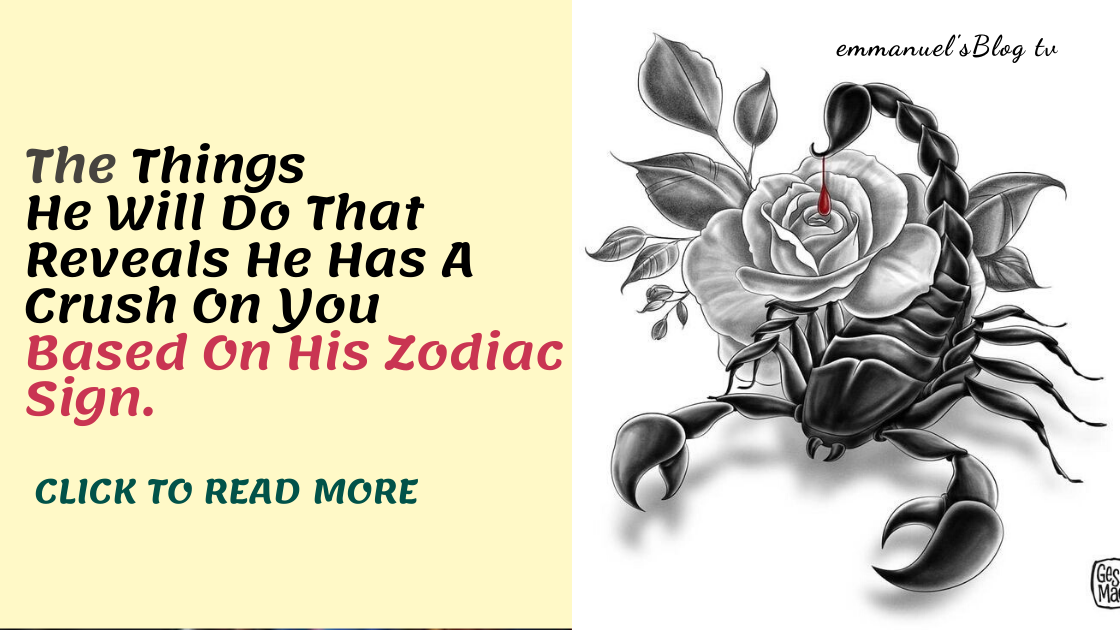 This is for the Ladies, Usually, it is hard to know when a man loves you since he’s not come to confess his love to you. You had not want to guess or doubt, so you avoid thinking it. However, you might be right or wrong in your guess.

But for you to really know what is up with him, read on to know how to unravel his secret desire to have you.

This will help you to know how to play your game smart enough as a lady.

‘He Makes His Feeling Known Immediately’

Aries would never mince words, they tell you how and what they feel- remember they are so honest. They are not scared you will chase them away, they tell you what their mind is saying in an instant, even without planning it before. They are like that- so straightforward.

‘He Will Be Extremely Kind To You’

Taurus is generous usually, but he will take it to the extreme if you are his crush. He will be kind to you materially (buying you gifts, funding you) and in words (words of affection and encouragement, beautiful compliments). Tell him you will stop by in his house, then he will prepare you a home-made dish before your arrival. 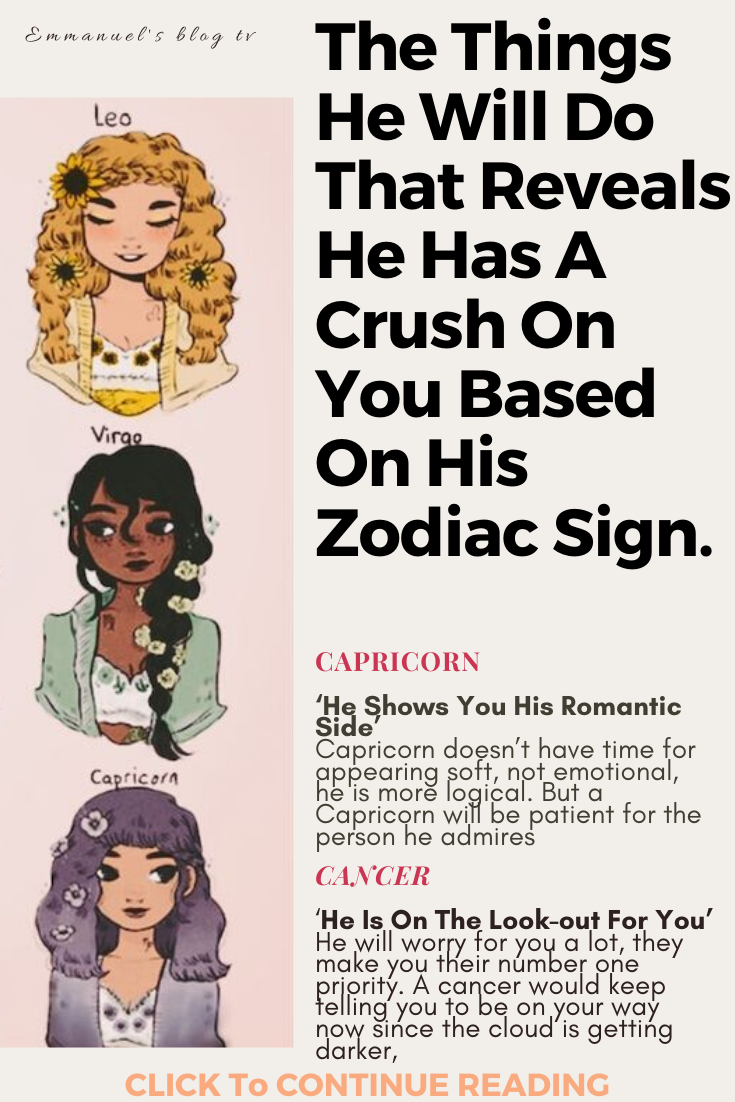 ‘They Are Into You When They Are Committed To You’

Regardless of how close you are with a Gemini, he always leave the doors open knowing fully well something might happen anytime. But to the person he feels for, he offers himself to the person and come so close to the extent that the person he has crush on would feel it. If you observe this, then know that his feelings for you is true. He would never do that unless he is into you, normally, they don’t like to be tied down but love is an exception.

‘He Is On The Look-out For You’

He will worry for you a lot, they make you their number one priority. A cancer would keep telling you to be on your way now since the cloud is getting darker, so that you will not hit bump on your way, they remind you always that it’s time for your medication while you are sick, even when they are away.

He thinks about you always, and you will know it.

‘He Will Impress You’

They make things and send a signal to the person they have affection for by showing them that he is capable: buy you things, visit interesting places with you. He will be so kind to you with his money, time and other resources. They are generous to their crush. 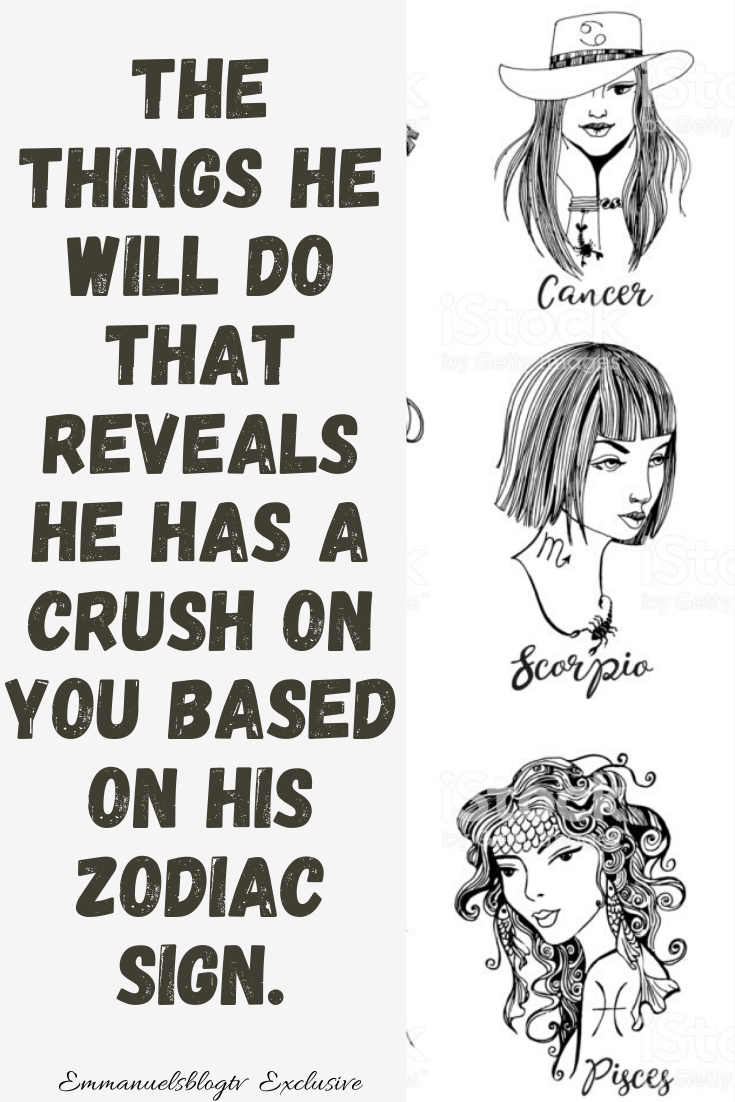 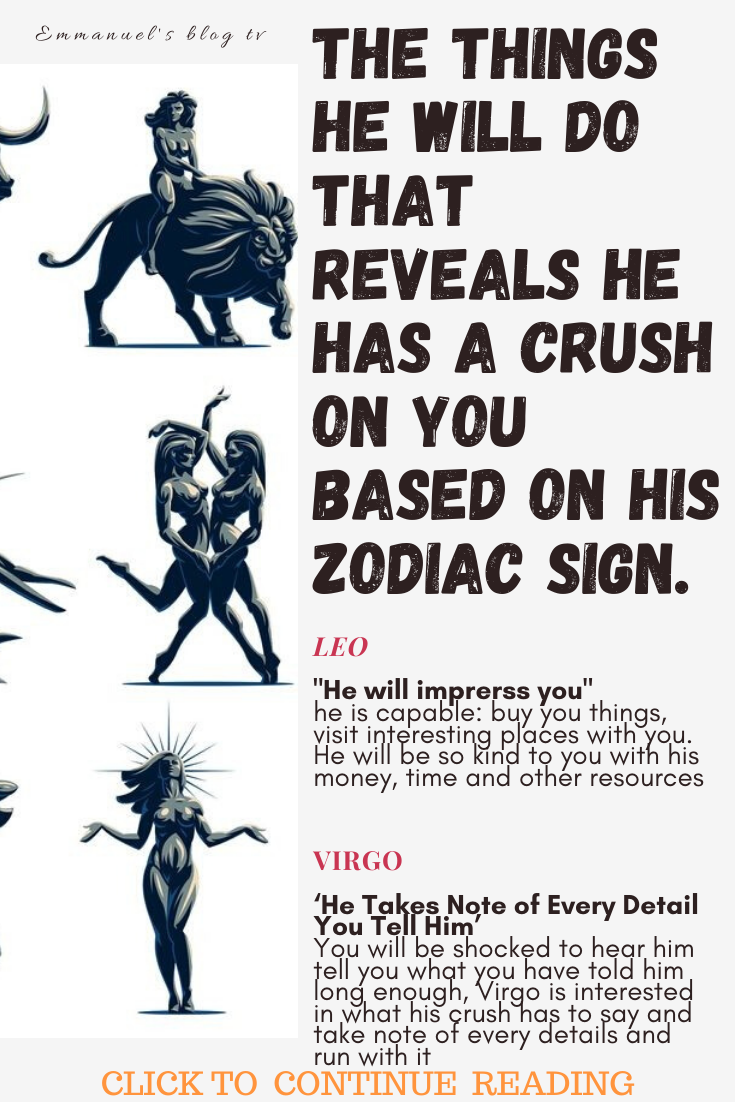 ‘He Takes Note of Every Detail You Tell Him’

You will be shocked to hear him tell you what you have told him long enough, Virgo is interested in what his crush has to say and take note of every details and run with it. He will never ask you what you’ve already told him- he now knows your favorites (you don’t have to tell him again), he will never forget again. More so, he will be there at all times for you.

‘He Is Persistent In His Commitment To You’

Libra men are romantic to virtually everybody; in the way they talk and relate. Love is easy for him, it takes him no extra effort to love people. But you can be so sure of his feeling to you if he persists in his love/romance gestures to you. If he takes no break in touching your emotions, then he is real.

‘He Wants To Engage You In Meaningful Discuss’

A Scorpio man that has romantic feeling for you will try hard to connect with you; trying to know many things about you. You will see him in his ‘inquisitive mode’, then you should know he is getting serious with you, and secretly want to level up your relationship with him. He will hold meaningful (intense) discussion with you, and ask you some sensitive questions (which you are not burdened to answer), he just want to know you more.

‘He Will Propose You Do It Together’

Sagittarians are so adventurous; always on the move. This is the very thing he enjoys most, so if he proposes an invitation to you to join him in a particular cause, to go out and get some things done. Then you should know he has that thing for you. Know that he seeks for your company not to just accompany him, infact, he has been doing it alone, and he prefers it more this way. He only reaches out to you because he is felling something intense for you.

‘He Shows You His Romantic Side’

Capricorn doesn’t have time for appearing soft, not emotional, he is more logical. But a Capricorn will be patient for the person he admires, and show soft spot to his crush.

If a Capricorn manages to give you flowers, checks on you often with emotion-provoking questions, then he is feeling that passionate feeling for you. He is into you.

‘He Flirts With You’

Aquarius would not do this (flirt) with you despite he is attracted to you, he would still try to keep long distance from you. But at a certain point which turns out to be crucial when the feelings he has for you become overwhelming, then he steps forward and flirt with you. He has taken his time to confirm if his feelings to you are ever true, so as you notice him being romantic to you. Know that he is so into you.

‘He Gets His Signal Across To Your Senses’

Because he is sensual, he makes good use of your senses by connecting with them via sensitive touch and eye contact- there is no how you won’t feel it. It will be so real that you will know that he has a thing for you for sure. He touches and hold you passionately, with a passionate signal through his eyes. 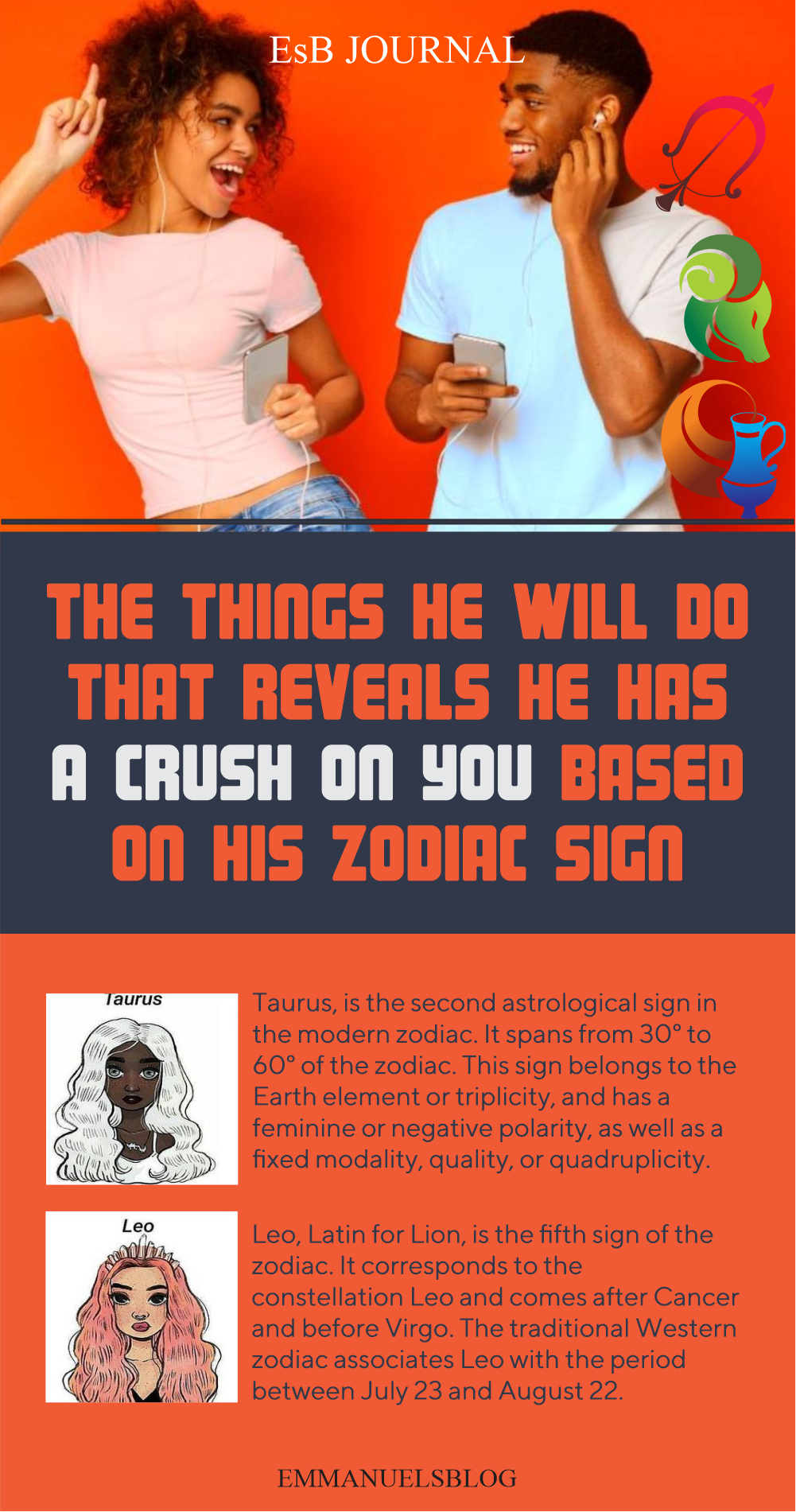 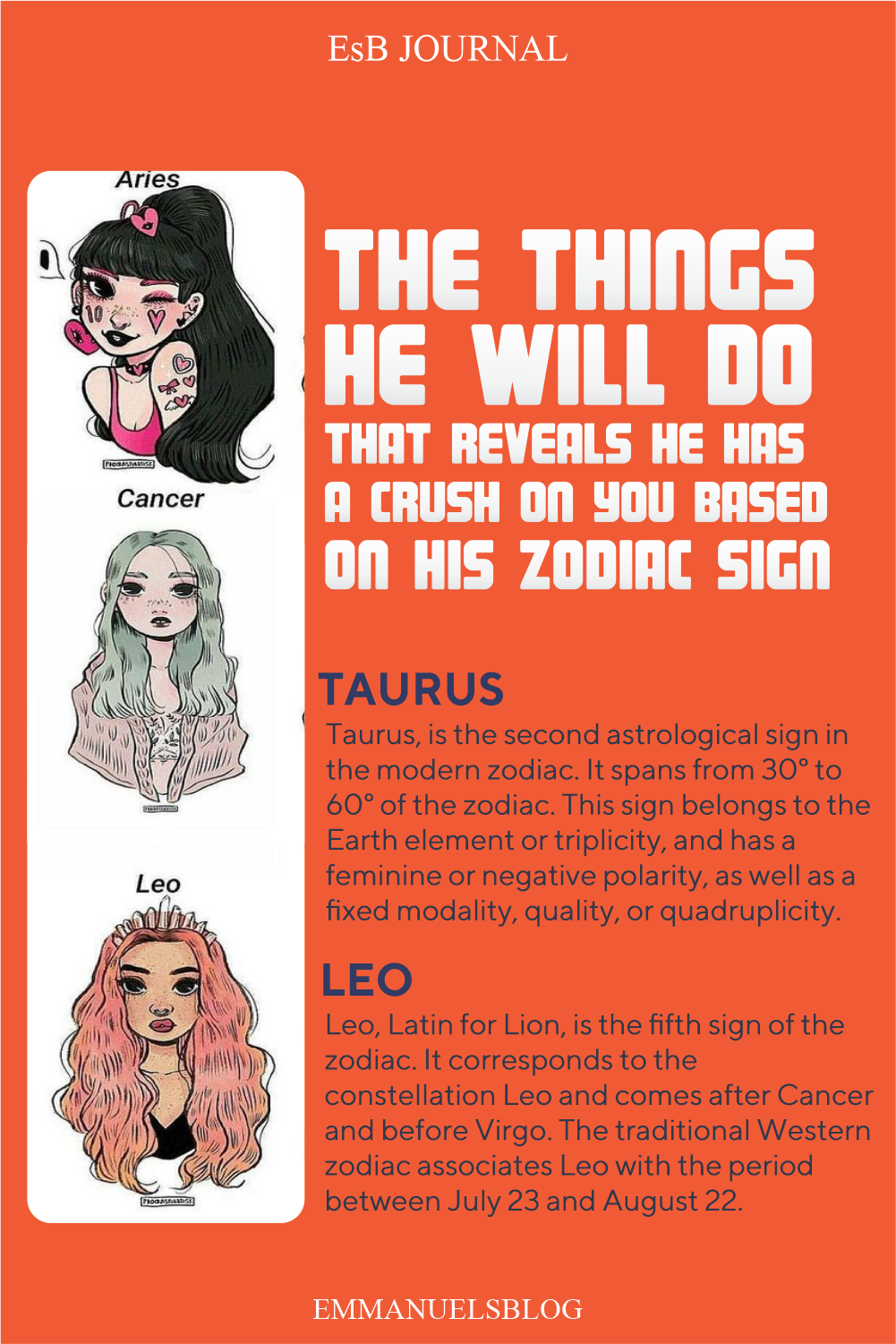 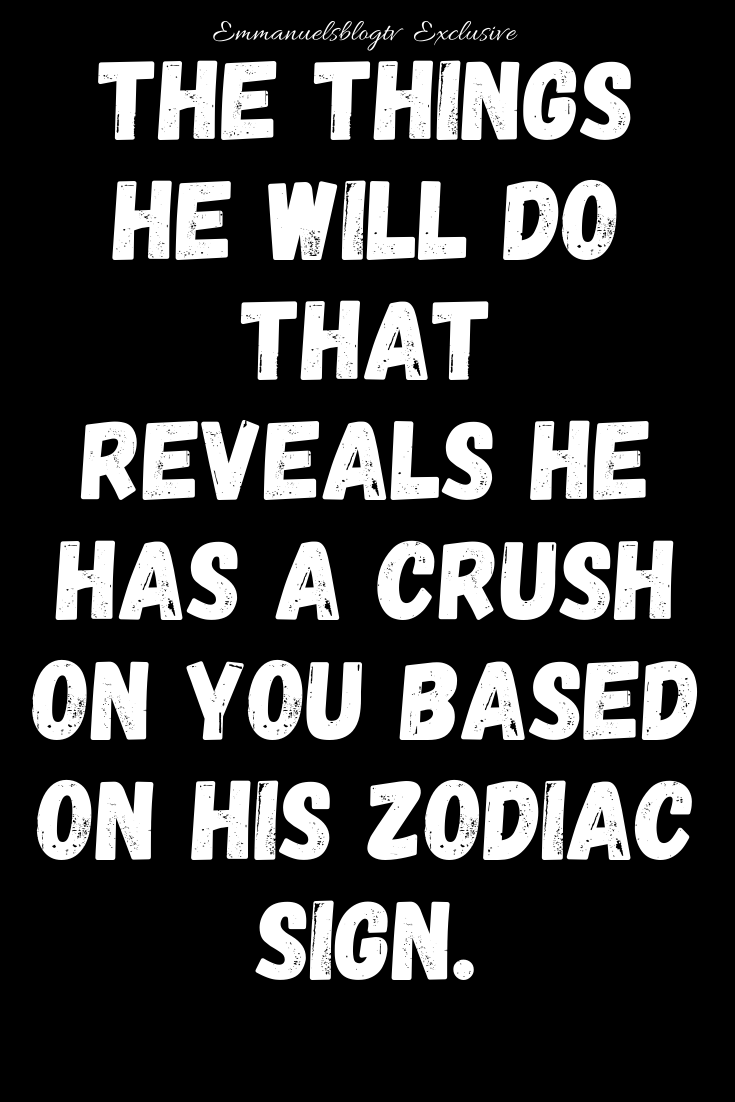