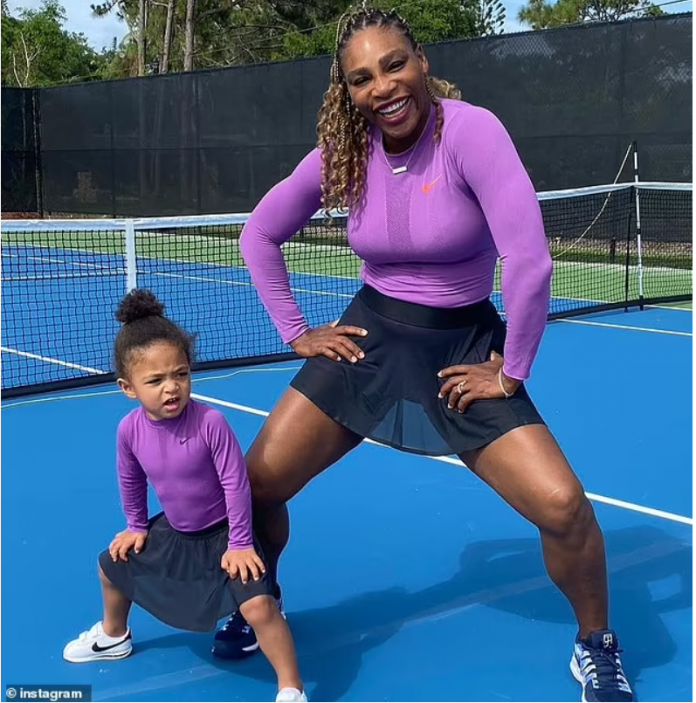 Serena Williams detailed the touching words her five-year-old daughter told her after she lost a recent tennis match, revealing it was the ‘sweetest thing ever.’

The pro tennis legend, 41, disclosed the sweet moment she had with her daughter Olympia during an appearance on The Drew Barrymore Show recently.

According to Serena, her daughter reassured her that it was ‘OK’ after she failed to win at the US Open, adding that she was ‘so proud’ of her.

Serena recalled of the heartwarming moment: ‘It was the sweetest thing ever and I was so proud of her.’

She added that she was at a loss of words from Olympia’s reaction to her loss, and admitted she ‘wanted to cry.’

The star athlete, who shares Olympia with her husband and Reddit co-founder Alexis Ohanian, 39, admitted she used to feel uncomfortable when her five-year-old attended her matches.

‘I just was afraid I would get distracted because I would be like, ”Wait, is she drinking? Is she doing this?”’ Serena said.

‘She came to a match once, like super brief, and I was like, ”Oh my God, is she wearing sun cream?” It’s nuts.’

She added that she would often become ‘stressed’ while playing when Olympia was in the crowd.

Serena admitted that she hadn’t ‘really had her at matches’ until this past summer, when Olympia attended the US Open.

At the event, the pro tennis player won her first two matches before losing her third and final match on September 2, to Australian player Ajla Tomljanovic.

The loss marked the end of Serena’s tennis career.

Olympia couldn’t contain her excitement for her mom as she cheered her on from the stands.

‘Go mama, I’m so proud of you,’ the five-year-old cheered.

Olympia seems to be following her mom’s footsteps, as she’s been taking private tennis lessons since she was three years old.