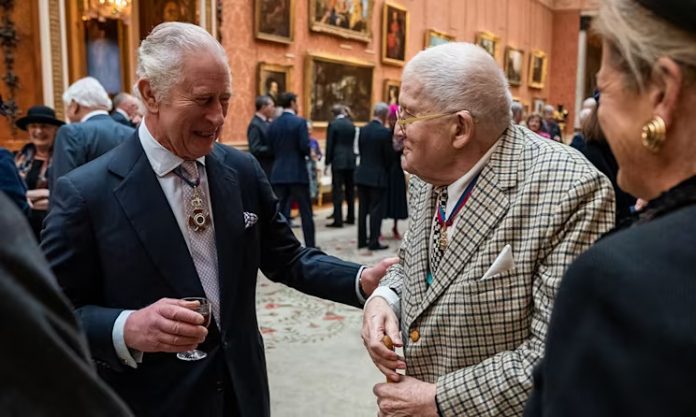 The dress code is usually incredibly formal, but the monarch allowed artist David Hockney, who uses a wheelchair to attend the event in the footwear of his choice, with the artist opting for a pair of bright yellow crocs. When His Majesty met David, who insisted on standing for the King, he complimented him on the bold choice of footwear. “Those yellow galoshes…beautifully chosen,” he said.

Charles also revealed that he was looking forward to the artist’s next project, which will be an immersive experience as guests interact with his art.

The monarch hosts an annual lunch for the members of the Order of the Merit, with appointees being leading figures from the world of politics, science and the arts. The Order was created by King Edward VII in 1902.

Sir David Attenborough and Sir James Dyson are counted among their numbers, and ahead of the meal six new members were introduced.

Speaking about introduction, Floella said: “I just feel absolutely thrilled to know that one of Her late Majesty’s final wishes was to have such a diverse list, and to be the first black woman from the Caribbean to be included in the Order.”

The guests had a lavish lunch, being served a croustade of soft poached egg Alexandra, pithivier of partridge and celeriac, and a lemon and mint tart.