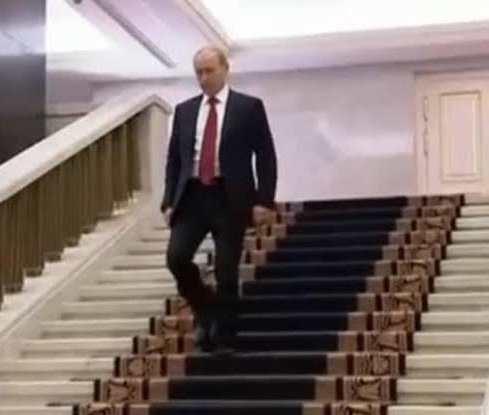 It is claimed that the Russian leader has bruised his coccyx as he slipped down seven steps when he fell down stairs at his home.

Channel General SVR claims the 70-year-old Russian leader allegedly suffering from deteriorated health since he launched his war in Ukraine, suffered the fall on Wednesday evening when he slipped coming down stairs at his Moscow home.

A Telegram channel which claims links to his bodyguards has confirmed he also soiled himself while continuing to suffer from cancer.

Putin landed on his coccyx, fell down five steps, then rolled on to his side and slid down two more. The sharp impact caused him to ‘involuntarily defecate’ due to ‘cancer of the gastrointestinal tract’, according to the channel.

The incident reportedly took place in front of the president’s bodyguards, who reacted quickly and rushed to Putin’s aid.’

Three security officers helped the president to get to the nearest sofa and called the doctors who are on duty at the residence.’

A report said: “After a complete examination, a bruise of the coccyx and soft tissues was diagnosed.

“Nothing critical was diagnosed and the bruising was treated with painkillers. An investigation is to be carried out into what provoked the fall.

“He wears special shoes, even at home, with anti-slip coating, and the stairs in the residence are considered ‘safe’. As it turns out, all precautions are meaningless when nerves are at stake.”

However, Putin was filmed and pictured touring a laboratory in Moscow the following day with no apparent signs of injury.