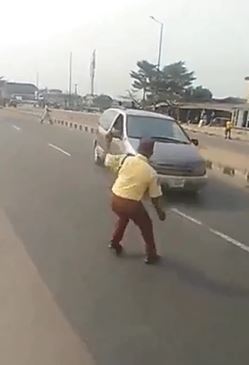 Video footage captured the shocking moment two officials of the Lagos State Traffic Management Agency were almost crushed by a driver they planned to arrest.

According to eyewitnesses, the driver was to be arrested for driving on the lane dedicated to Bus Rapid Transit (BRT).

The erring driver instead of stopping his car drove like he was about to hit the LASMA officers. They had no choice but to run for their lives.

Who are the people living in Lekki?- Man laments the high cost of house rent in Lekki