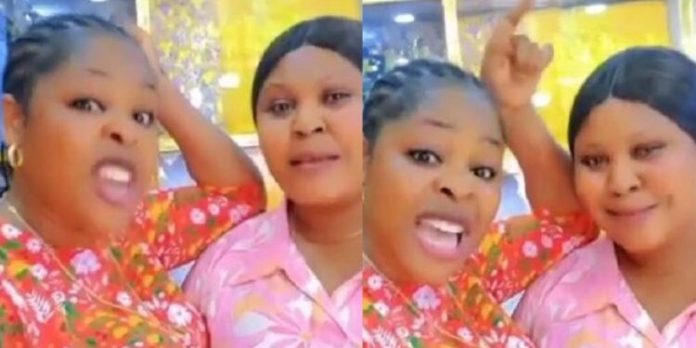 A Nigerian woman has berated married women who end their marriages because their husbands cheated.

The woman in a video currently making the rounds implores women to be more forgiving and to pardon their husbands when they apologize for cheating on them.

Speaking in Yoruba, she emphasized that cheating is not enough grounds to end a marriage.

“So, because your husband engaged in small cheating you say you are moving out of his house. Your friend is telling you, ‘No you just have to leave’.

“Your head is not correct. Your husband cheated with badly behaved children outside and because of that, you decide to move out?

“Don’t you know you are the one that one who owns your home? If you get angry a bit and he begs you, let it end there”, the woman who spoke in Yoruba said.

In other related news, a Nigerian woman has in a video shared online advised married women to stay in their marriages regardless of the challenges because there’s nothing on the street.

She said women should not allow marriage ‘advisers’ deceive them into leaving their matrimonial homes at the slightest inconvenience.

According to her, being single is not fulfilling otherwise popular actresses, Mercy Aigbe and Iyabo Ojo would have remained single, instead of finding a partner.

Recall that in 2022, Mercy Aigbe got married to her husband, filmmaker Kazim Adeoti, several years after her separation from her ex-husband, Lanre Adeoti.

Iyabo Ojo also recently unveiled her lover as a popular Talent manager, Paul O, after years of being publicly single.

Citing these actresses as an example, the woman advised women to endure any issues they face in their marriages because there’s nothing out there.

The woman who spoke in Yoruba said, “Don’t be deceived and endure your marriage no matter what if street sweet actress Mercy Aigbe and Iyabo Ojo will not get married”.

Having S*x Could Help Me Ease Agony Of Gout- Experts