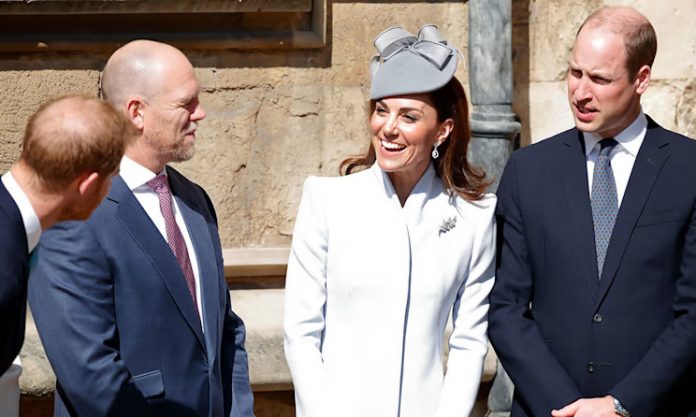 The former rugby star, who married the Queen’s granddaughter Zara Phillips in 2011, was pictured enjoying extended drinking sessions in bars and hotel pools with his ten friends. The photos made headlines across the country, prompting his royal in-laws to poke fun at him just weeks before the wedding.

During a chat with Alex Payne on JOE UK’s House of Rugby, Mike, who was joined by his wife Zara, admitted: “I got ripped – they got stuck into me after I got back from my stag do when it was the Duke’s 90th. All of them. It was in the papers. ‘Had a good time did you?’ Read about it.” A sheepish Mike added: “Oh well, hid under the radar on that one.” His wife Zara quipped: “He was so subtle.”

The royal couple were chatting on House of Rugby about their fantasy rugby team, with Mike revealing he would pick his cousins-in-law Prince William, Prince Harry and Kate.

The former England captain picked the Queen as captain, adding of Harry, or ‘Haz’ as he affectionately calls him: “Haz, a front lineman in the military, he’ll crash that ball up for us, he’ll dominate, he’ll boss the tackle line.”

“Willy is quick, I’ve raced him, he’s quick, he has really fast leg speed,” Mike said of the Prince of Wales, adding that he would put Kate in the left wing because “she loves running, she’ll run all day”.

Zara and Mike have been married for over ten years. The couple are the proud parents to daughters Mia, eight, Lena, four and one-year-old son Lucus.

The doting dad previously said about how well Mia has adjusted to her role as a big sister, saying: “Mia is very happy to be a big sister, she is happy about that. We are lucky that people that have sent Lena a present have also thought about Mia, so she is getting stuff to open as well.”